Helena Merriman woke with a start and patted the empty space in the bed.

‘I glanced at the baby monitor and saw my husband holding our four-month-old baby, Sam,’ she recalls. ‘It was strange because I hadn’t been alerted by his cries.

‘It happened again, once or twice a week, but I just put it down to fatigue from being a new mum,’ says Helena, 40, a BBC radio presenter and producer.

‘But after several weeks, it became even more regular. I found that if I slept on my right side, with my left ear up, I could hear Sam’s cries, but not if my right ear was uppermost. 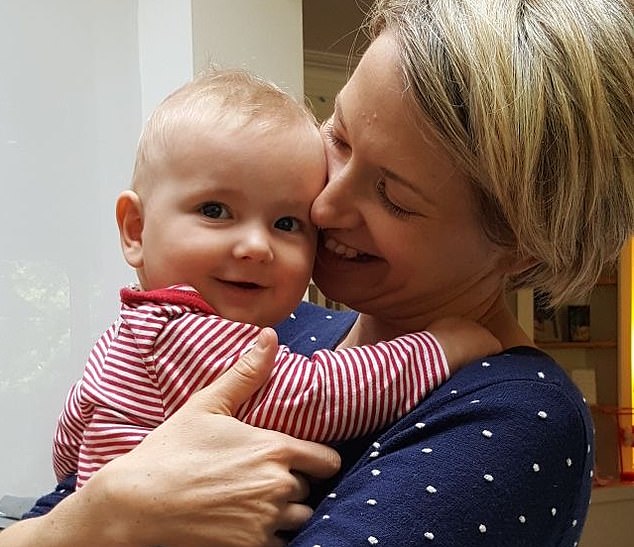 ‘Yet I still had good enough hearing to be able to manage when I was up and about, so I didn’t notice it much. And when I did, I’d come up with reasons why it couldn’t be a hearing problem.

‘For example, I was forever apologising to my husband, Henry, for turning on the subtitles on the TV, but thought it was maybe because I was obsessed with seeing the dialogue.’

While Helena was on maternity leave, daytimes weren’t a problem because of the good hearing in her left ear and the baby monitor, which amplified sounds.

But in the summer of 2017, as she started going out more, she was horrified to find that she couldn’t hear conversations, particularly in crowded, noisy places.

‘I’d be in the pub and become very reliant on lip-reading,’ says Helena, who lives in South-West London with her husband Henry Hemming, 42, a best‑selling author, and their children Matilda, eight, and Sam, now four.

‘I’d be slightly smiling and nodding when I couldn’t hear and then I’d see the bemused look on people’s faces which meant I wasn’t making sense. I felt embarrassed and awkward. 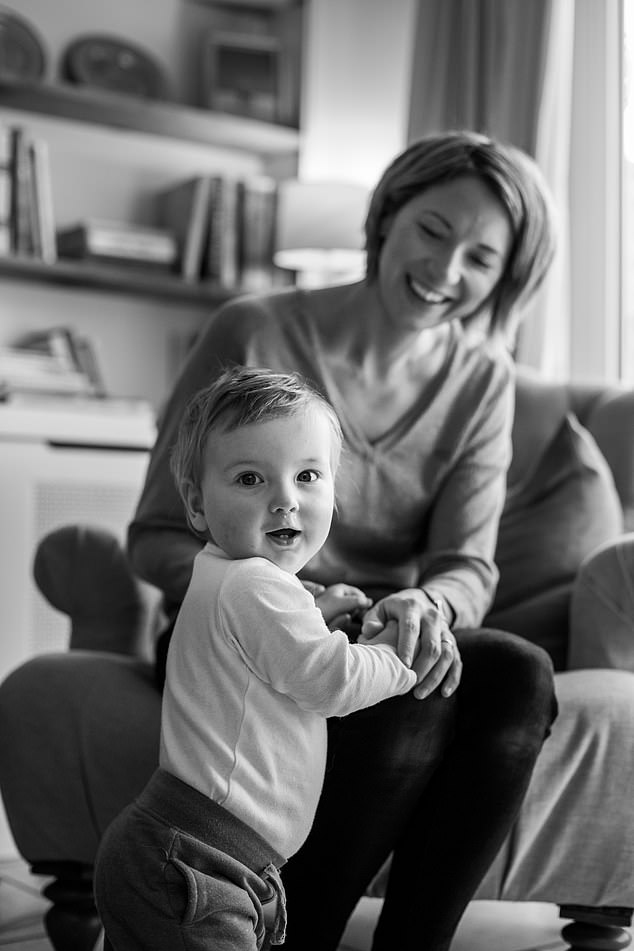 While Helena was on maternity leave, daytimes weren’t a problem because of the good hearing in her left ear and the baby monitor, which amplified sounds. But in the summer of 2017, as she started going out more, she was horrified to find that she couldn’t hear conversations, particularly in crowded, noisy places

‘I’d always been the first to say yes to a night out, but over the following few months I stopped, as it wasn’t enjoyable feeling like I was a bystander.’

After nearly three months of ignoring it, she made an appointment with her GP. She was sent to an audiologist in June 2017, who said Helena had lost ‘a bit’ of her hearing, possibly due to congestion, and advised using a steroid nasal spray for six weeks.

But the treatment didn’t work. Helena saw another audiologist in late summer who took more detailed hearing tests, including one where she pressed a button whenever she heard a beep.

‘I could hear them well at first but they gradually died away,’ she says. ‘I had a sick feeling in my stomach. The audiologist showed me a graph of my left ear, and there was a line at the top showing it had good hearing.

‘On the graph for the right ear, the line was about half-way down and he said I’d lost a significant amount of hearing in that ear.’

She was diagnosed with otosclerosis and told that she would gradually lose her hearing.

‘I felt numb,’ she says. ‘That night I lay awake with so many questions in my head. I hadn’t even asked how soon I might lose my hearing; I was just in shock.’

Otosclerosis is a degenerative ear condition, normally on both sides, which causes gradual hearing loss and even deafness.

It affects up to 1.3 million people in the UK and generally develops between the ages of 15 and 35.

It occurs when abnormal bone growth prevents movement of the stapes (or stirrup) — one of three tiny bones in the middle ear that vibrate to amplify and transmit sounds.

Warning signs include a gradual loss of hearing, difficulty hearing low sounds and speaking quietly, as your voice sounds loud to you.

It’s thought the condition may be caused by a combination of genetic factors or complications from a virus. But, as Helena discovered, the hearing loss can be accelerated by other factors, including pregnancy. She may have had some deterioration in her hearing when expecting her first child, but not enough to notice.

‘There can be a rapid acceleration of the condition with hormonal change,’ says David Golding-Wood, an ear, nose and throat (ENT) surgeon at the private Chelsfield Park Hospital, in Bromley, Kent. ‘It’s most characteristic in the later stages of pregnancy.

‘Here, it’s principally due to oestrogen, which is involved in certain kinds of bone formation.’

After her diagnosis, Helena returned to work in October 2017 as she mulled over her treatment options. ‘By that point, I could hardly hear people when doing interviews,’ she says. ‘I’d put my headphone volume right up in desperation.’

In February 2018, Helena returned to her GP, who referred her to Jeremy Lavy, an ENT surgeon at the Royal National Throat, Nose & Ear Hospital in London. He suggested she try a hearing aid or choose surgery, where the stapes are removed and replaced with a prosthesis between 3mm and 6mm long.

Surgery produces a more natural sound, but comes with a 1 per cent chance of total or partial hearing loss.

‘Tinnitus can also occur,’ says Mr Golding-Wood. This may be triggered by the trauma of surgery.

Helena found hearing aids too ‘loud and metallic’, and decided surgery was the only viable option. She had the operation in March 2019 under local anaesthetic.

‘There was an incredible moment when the prosthesis was put in and I could hear everything in the room so loudly,’ she says. ‘I could hear the sound of the instruments in the tray, people walking around, the odd laugh. It was all so sharp and clear.’

But two hours later she developed tinnitus. ‘This noise like a whistling kettle suddenly came on.’

She was told it might subside, but it didn’t. ‘At home that night, I couldn’t sleep and this incredibly loud noise wouldn’t stop.

‘Two days later the hospital gave me a course of steroids [thought to reduce perception of tinnitus by increasing blood flow to the ear], but the noise was still maddening. It turned out I was one of the 10 per cent of patients where tinnitus gets worse after surgery.

‘That stage was really hard as Sam was saying his first words,’ adds Helena. ‘I was recording him, but not always quite hearing what he was saying.’

Meditation, which is said to reduce the stress of the tinnitus, by training the brain to accept the sounds, has since helped her.

‘I’m now habituated to the tinnitus, though it can be draining,’ she says. ‘I have trouble with lower frequencies and still need the subtitles on TV, but overall my hearing isn’t too bad.’

She and Henry have, however, come to a tough decision.

When Helena discovered that pregnancy could fast-track a deterioration in her hearing, she made what many would consider a difficult decision not to have a third child

Since her diagnosis, Helena has devised a new Radio 4 series, Room 5, about people who have received real-life shock diagnoses.

‘I thought of the idea on the bus on the way home from my own life-changing diagnosis,’ she says.

Room 5 begins on Radio 4 and on the BBC Sounds app from January 11 at 9am.

Short-sightedness may be linked to depression, according to a study by the First Affiliated Hospital of Soochow University, in China, involving more than 4,500 adults.

Another, a five-year study of more than 7,500 Americans aged 65 and older, found those with sight problems at the start were more likely to experience symptoms of depression, reported the journal JAMA Ophthalmology in 2019.

This effect can be partly explained by ‘reduced social interaction’, suggests Badrul Hussain, a consultant ophthalmic surgeon at Moorfields Eye Hospital, London. ‘If your vision is impaired, you can’t do the things you love — you can’t even read your book for company — and you can become more depressed.

‘If you can’t even see the TV, you might think: “If I go outside, will I be safe?” and anxiety increases.

‘First, try to get treatment. If it’s not a treatable problem, ask your consultant about eye clinic liaison officers, who can help arrange counselling, and sort out vision aids.’

He suggests some simple tweaks can also help, such as putting your iPad or tablet screen on high contrast, or making the font size on your computer larger.