Chet Hanks is opening up about what it was like growing up as Tom Hanks’ son.

In a video introducing his new YouTube channel Tuesday, Hanks, 31, addressed his famous upbringing because it’s “the No. 1 question” people often ask him – including Former President George W. Bush, who Hanks said he met as a 14-year-old during a family visit to the White House.

“There’s a lot of advantages, but sometimes it can be pretty weird,” Hanks recalled answering Bush’s question at the time.

Hanks said his privileged background has afforded him opportunities to “travel the world, stay in nice hotels, fly in private planes” and that he wouldn’t change the circumstances of his life. “I love my parents,” he said of dad Tom Hanks and mom Rita Wilson. “I wouldn’t want any different parents, and I wouldn’t want any different life, so I’m very grateful and blessed for all that.”

But growing up famous can be “a double-edged sword,” Hanks said, and “it’s a lot more complicated” than people realize. 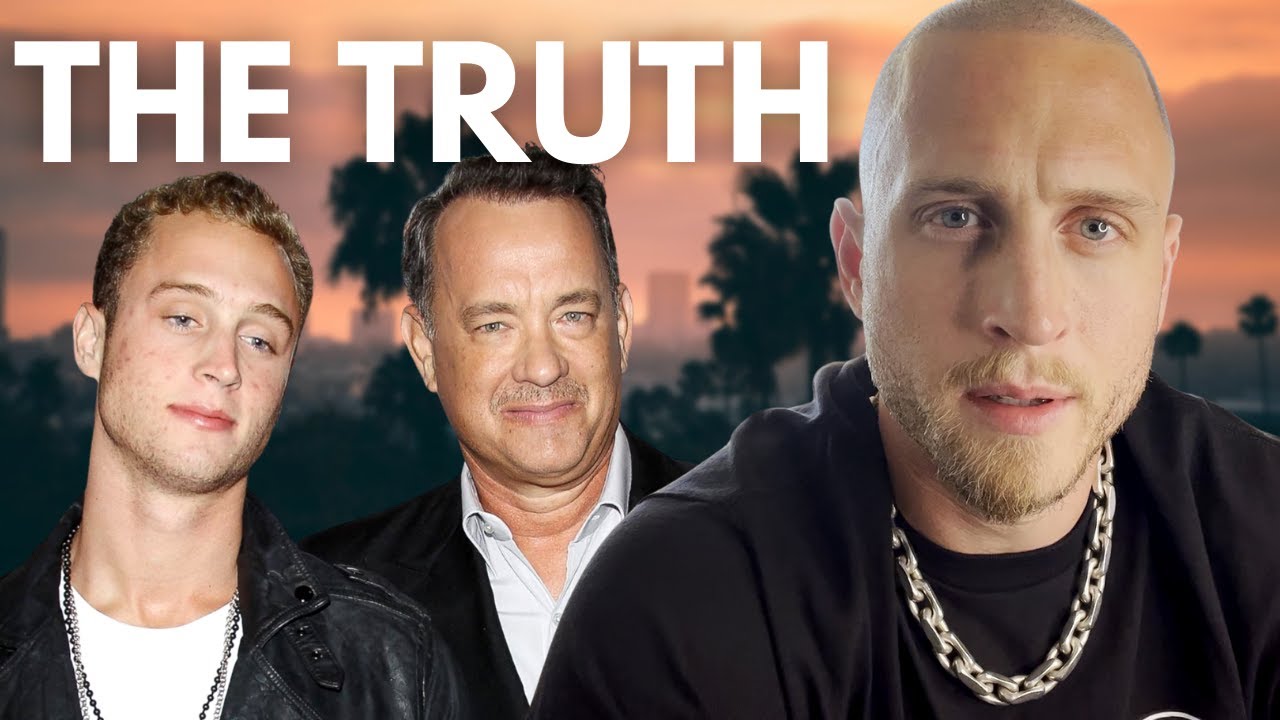 “You’ve got to keep in mind that fame is the most powerful drug known to man,” Hanks said. “It can also be the most destructive. People are infatuated with fame: They put famous people on a pedestal.

“Everybody wants to be famous. It creates a lot of jealousy, a lot of envy. Everyone is doing whatever they can to become famous. We think that it’s going to validate us, and I’ve been guilty of that too. But the truth is that seeking validation from fame and from others only amplifies your misery. True validation can only come from within yourself.”

Hanks said people often perceived him as a “really arrogant, entitled, spoiled brat,” and said these preconceived notions took a toll on him emotionally.

“People would make up their minds about me before they even got a chance to know me, and it was extremely hard to break down their wall, so I encountered a lot of disdain, a lot of animosity, a lot of negativity because everybody was just prepared to hate my guts,” Hanks said.

Hanks added that this perception of him couldn’t be farther from how he was raised.

“I’m very privileged, but I wasn’t spoiled,” Hanks said. “My parents didn’t spoil me; I was never just given money or an allowance. I had to work and earn everything that I’ve made, and it’s been that way for my entire life.”

Related:Tom Hanks’ son Chet Hanks opens up about drug use

Hanks said it took growing up and learning to accept that other people’s perceptions of him are a “reflection of themselves.”

“I’ve changed my life,” Hanks said in his YouTube video, before addressing his past struggles with substance abuse as a teenager. “I no longer have gone down that self-destructive road of dealing with my anger and my resentment by self-destructing, by pleasure-seeking through partying, drugs, alcohol, substances, everything. “

In addition to his YouTube channel, Hanks has launched Hanx Fit, a fitness program. Hanks has also dabbled in music and acting , appearing in TV shows such as “Curb Your Enthusiasm,” “Empire” and “Shameless,” and rapping under the name Chet Haze.

“Now I’m 31 years old, and I’m just now getting to the point where I’m starting to truly feel that I don’t really have anything to prove to anyone,” Hanks said. “All in all, I’m really happy, and I’m really blessed. I’ve learned a lot about myself.”

In March 2021, Hanks was sued for $1 million by ex-girlfriend Kiana Parker, following allegations of physical and mental abuse.

Kelly Clarkson appears on daytime talk show remotely from quarantine: 'This is me broken'

In its proclamation of the worst films of 2021, the Razzies lambasted a critically reviled Princess Diana musical and LeBron James’ “Space Jam” sequel, but spread love instead of hate for Will Smith.

The Golden Raspberry Awards, annually announced the day before the Academy Awards, bestowed five dishonors on Netflix’s “Diana: The Musical,” a filmed production of the recent Broadway show that closed after 33 performances. “Diana” beat out “Infinite,” “Karen,” “Space Jam: A New Legacy” and “The Woman in the Window” for worst picture, plus picked up worst screenplay and worst actress for star Jeanna de Waal.

“New Legacy,” the live-action/animated hybrid basketball comedy featuring James hooping it up with Bugs Bunny and Co., earned three Razzie awards. James was named worst actor and also was saddled with worst screen couple – which went to James and “Any Warner Cartoon Character (or WarnerMedia Product) He Dribbles On” –  while the movie snagged worst sequel.

How to watch the 2022 Oscars:Everything you should know about Sunday’s Academy Awards

“House of Gucci” star Jared Leto lost his Screen Actors Guild race for best supporting actor but nabbed the Razzie for worst. And Bruce Willis does so many VOD movies now that he received his own special category (worst performance by Bruce Willis in a 2021 movie) that, to no one’s surprise, he won – for “Cosmic Sin.”

(or WarnerMedia Product) He Dribbles On, “Space Jam: A New Legacy”

A bill that could allow electronic transactions at weed dispensaries nationwide is again make its way through Congress but the SAFE Banking Act might not be the cure-all that supporters envision.

In over a decade of operating cannabis shops in Washington, Shea Hynes never once worried about his stores getting robbed at gun point – until recently: In a span of three weeks, his stores were robbed three different times at gun point.

Reports of armed robberies at cannabis dispensaries like Hynes’ have nearly doubled in the first quarter of this year compared with all of last year, according to data maintained by the Craft Cannabis Coalition. The group, which represents more than 50 stores in Washington, has recorded more than 65 armed robberies so far this year, compared with 35 in 2021 and 29 in 2020.

CHICAGO — In a ridiculous coincidence, the Saint Peter’s Peacocks wrote NCAA Tournament history on National Peacock Day with a thrilling upset of Purdue.

The mid-major became the first-ever No. 15 seed to reach the Elite Eight, outdoing previous No. 15 seeds Oral Roberts (2021) and Florida Gulf Coast (2013). Exactly 0.8% of people picked the Peacocks to get this far, with the school from Jersey City, New Jersey, defying all odds. Is Saint Peter’s the best Cinderella of all time?

Meanwhile, the ACC is sitting pretty with three teams – Duke and now North Carolina and Miami (Fla.) – in the Elite Eight on the same day the Big Ten saw its last team go down.

A look at three key takeaways from Friday:

Coach Shaheen Holloway has this team playing inspired basketball, and now the Peacocks (22-11) are just one win from the Final Four. The best Cinderellas of the last two decades to reach Final Fours – George Mason in 2006, VCU in 2011, Loyola-Chicago (2018) all were double-digit seeded mid-majors. But none was as highly seeded as this Saint Peter’s team that’s now beaten No. 2 seed Kentucky, No. 7 Murray State and No. 3 Purdue.

OPINION:Saint Peter’s embodies wackiness and uncertainty of this NCAA Tournament

ANALYSIS:Purdue’s loss leaves Big Ten shut out of Elite Eight. We could see this coming.

OPINION:Houston is leaving Phi Slama Jama in the 1980s for good

While other bracket-busting NCAA Tournament darlings of yesteryear have had flair (FGCU’s “Dunk City”) or a lovable fan (Loyola’s Sister Jean), this team from the MAAC is doing it with defense, namely with nine steals. In spite of being undersized against the Boilermakers, the Peacocks used aggressiveness and hustle to outduel their seemingly superior opponent behind 6-8 freshman Clarence Rubert and 6-7 junior Hassan Drame. Daryl Banks III (14 points) is the go-to scorer for Saint Peter’s, but Mr. Clutch has been guard Doug Edert (10 points) off the bench. One stat to note: a 19-for-21 clip from the free-throw line. What’s been most impressive is the Peacocks’ ability to stay hungry and poised under pressure, winning close games in all three NCAA Tournament matchups.

Duke and Villanova advanced on Thursday, and fellow blue-bloods Kansas and North Carolina will now join them in the Elite Eight. And yes, if both the Blue Devils and Tar Heels win Sunday, we could see them meet in the Final Four.

Ever since North Carolina embarrassed Duke in coach Mike Krzyzewski’s final home game at Cameron Indoor Stadium, the Heels have been red-hot – knocking out No. 1 Baylor in the previous game in overtime. That continued against a UCLA team that reached the Final Four last year and seemed destined to get back. Caleb Love was brilliant again, finishing with 30 points off six three-pointers. Armando Bacot’s tip-in with 22 seconds left sealed the win in another impressive outing for coach Hubert Davis’ resilient team.

The last remaining No. 1 in the NCAA Tournament, Kansas stayed alive, escaping Providence by five points. It’s coach Bill Self’s ninth trip to the Elite Eight with Kansas and 11th of his career, as the Jayhawks (31-6) are one win from the Final Four. They’ve now won eight in a row and are looking like a title contender after entering the NCAA Tourney having won the Big 12 tournament.

The secret weapon for Kansas has been guard Remy Martin. For the third consecutive tournament game, Kansas got a jolt off the bench from the fiery Martin (23 points), the Arizona State transfer who has erupted in these NCAAs after playing a reserve role throughout 2021-22.

Despite garnering nine NCAA Tournament bids on Selection Sunday – the most of any conference – the Big Ten is out following Purdue’s stunning exit vs. Saint Peter’s. The league tanked in the first two rounds, with No. 5 Iowa – the conference tourney champ – getting upset by Richmond in the first round. No. 3 Wisconsin, No. 4 Illinois, No. 7 Michigan State and No. 7 Ohio State all lost in the second round. And now, with Michigan’s loss to Villanova, the overall underachievement is on full display. That’s a 9-9 finish in the tournament.

No Big Ten team has cut down the nets since 2000 (the Spartans), and it’s a depressing outlook for the league that posted the second-best NET score in 2021-22 and showcased several teams with Final Four potential.

The ACC, which finished with the sixth-worst NET score as a league, has Duke, North Carolina and Miami all in the Elite Eight. That’s after the Tar Heels, Hurricanes and Notre Dame were all bubble teams in early March. The NCAA Tournament is about matchups and pathways. No matter how well the Big Ten did in the regular season, much like the Pac-12’s surprising finish last year, the ACC is well-positioned with three teams still alive and two of them title contenders.