Corals across the Great Barrier Reef could be hit by mass bleaching for the fourth time in just seven years by the end of January, experts warn.

By the third week of January, an 800 mile section of the Great Barrier Reef will likely be undergoing a bleaching event, US National Oceanic and Atmospheric Administration (NOAA) data shows.

NOAA forecasts also show that by mid-February, areas north of Cairns in Queensland will be at ‘Alert Level 2’ – where both widespread bleaching and significant coral mortality are likely.

Chances of coral bleaching are higher during the warmer seasons, which is why Australian scientists are on high alert during the Southern Hemisphere’s summer.

Coral bleaching killed about 30 per cent of the Great Barrier Reef’s coral in 2016, according to scientists, and underwent its third mass bleaching event in 2020. 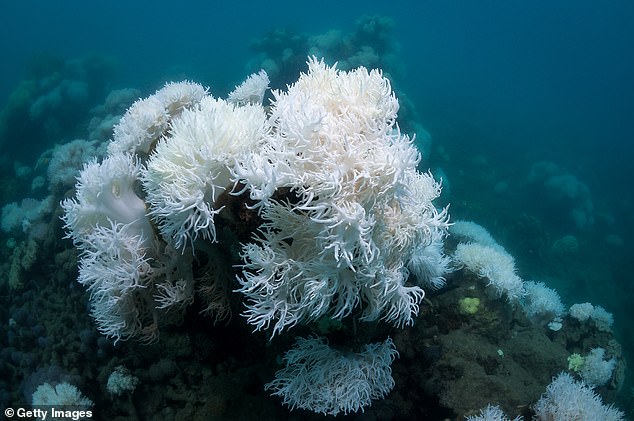 They can affect entire ecosystems and are a significant cause for concern for coral reef managers and scientists.

Experts blame human activities such as the burning of fossil fuels for rising water temperatures. Corals are threatened by warming waters, which leads to coral bleaching, as well as more acidic waters, pollution, disease and more.

Professor Peter Mumby at the University of Queensland told the Guardian that world-famous reef, listed as a World Heritage Site in 1981, is in a critical period for recovery.

However, he said NOAA forecasts ‘tend to be quite conservative’, suggesting the severity of the bleaching event could even be underestimated.

‘Everyone is feeling a bit depressed at the prospect of another bleaching event,’ Professor Mumby said.

Dr Selina Ward, also at the University of Queensland, also said: ‘This Noaa forecast suggests we’re likely to have a bleaching event and it would come earlier in the summer than we would expect.’

Scientists are hoping for a cyclone or other cooling event, will would offset the chances of mass bleaching caused by rising temperatures.

As ocean temperatures rise, warmer waters stress corals, causing them to release algae that lives inside them, which gives them up to 90 per cent of their energy.

This event causes the vibrantly-coloured communities of coral to turn white – an effect called coral bleaching. 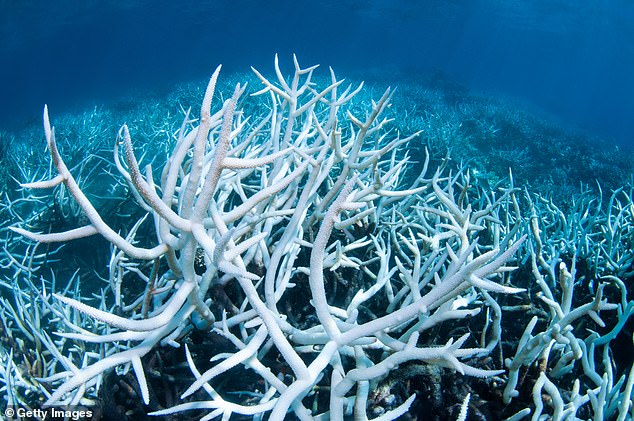 Climate change ‘undoing decades of knowledge on how to protect coral’

Coral reefs are so fundamentally damaged by climate change that decades of research on how to protect them may not even still be applicable, scientists say.

In a study of coral over 20 years, UK scientists found that a warming climate undoes decades of knowledge on coral in protected areas, known as marine reserves.

These delicate and vital ecosystems have been used as a guide to rejuvenate biodiversity in other disrupted regions.

Bleached corals are not dead, but are at a higher risk of dying, and these bleaching events become more common under climate change.

While some coral reefs are able to recover over time, others become dominated by seaweed.

Coral can survive bleaching if it receives nutrients soon enough, but if not, it can cause death within days, previous studies have shown.

Over the years, repeated coral bleaching due to warming seas causes disruption to marine ecosystems around the world.

This reduces the availability of food and shelter for many marine species that rely on these coral structures, resulting in biodiversity losses.

Fortunately, Australia’s climate is currently under the influence of La Niña – the large-scale cooling of the ocean surface temperatures in the central and eastern equatorial Pacific Ocean.

This is expected to deliver more cloud and rain to the reef’s waters, which would cool temperatures and potentially avoid a bleaching event.

‘But we have just not seen that yet this summer,’ Dr David Wachenfeld, chief scientist at the Great Barrier Reef Marine Park Authority, told the Guardian.

‘We’re hoping those typical La Niña conditions will kick in. The weather events over the next few weeks are critical.’

In April 2020, Australian scientists said the Great Barrier Reef underwent its third mass bleaching event in the space of five years, throughout the 2019-20 Southern Hemisphere summer.

Air surveys of 1,036 reefs revealed the northern, central and southern areas had been badly hit.

The ARC Centre of Excellence has previously estimated that only the southern third of the Great Barrier Reef has escaped unscathed from coral bleaching. 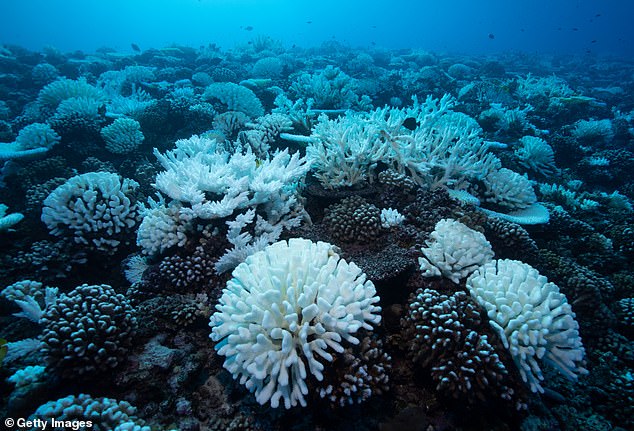 Bleached coral in French Polynesia during bleaching in 2019, thought to have been caused by heat stress due to warmer water temperatures as a result of global climate change 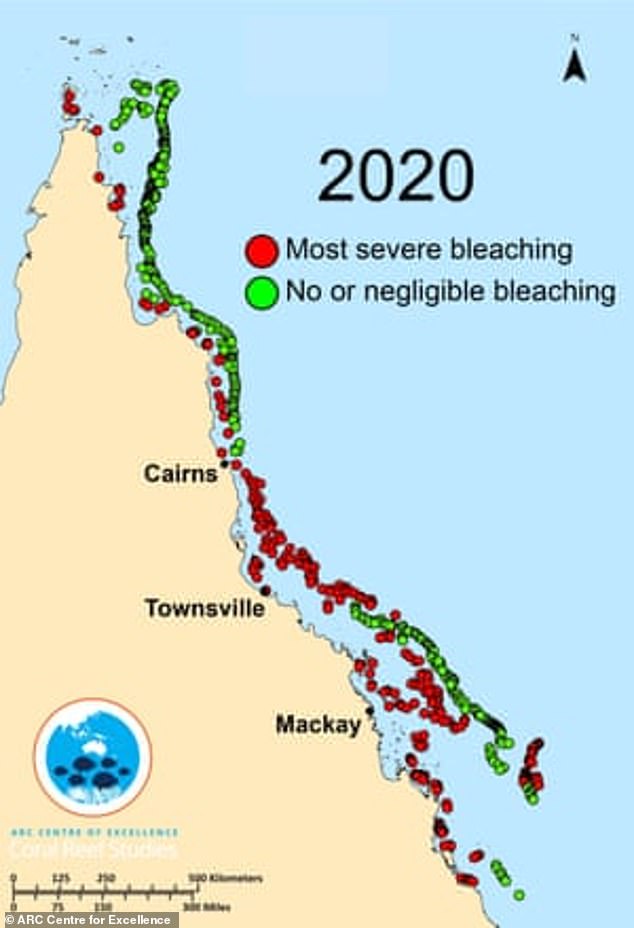 Air surveys revealed the northern, central and southern areas had been hit by coral bleaching during the 2019-20 Southern Hemisphere summer

One promising development to reduce bleaching  has been scientific attempts to transplant live corals grown in the lab to dying reefs in the ocean.

It’s thought that these new lab-grown corals will boost the reef’s recovery as a whole and bring it back to a healthy state.

However, these transplanted corals often face low survival rates due to poor planning and site selection based on convenience, according to University of Hawaii Manoa researchers.

Other coral relief efforts have included playing the ambient sounds of a healthy reef via loudspeakers to lure young fish back to damaged areas.

Corals have a symbiotic relationship with a tiny marine algae called ‘zooxanthellae’ that live inside and nourish them.

When sea surface temperatures rise, corals expel the colourful algae. The loss of the algae causes them to bleach and turn white.

This bleached states can last for up to six weeks, and while corals can recover if the temperature drops and the algae return, severely bleached corals die, and become covered by algae.

In either case, this makes it hard to distinguish between healthy corals and dead corals from satellite images.

This bleaching recently killed up to 80 per cent of corals in some areas of the Great Barrier Reef.

Bleaching events of this nature are happening worldwide four times more frequently than they used to.

An aerial view of Australia’s Great Barrier Reef. The corals of the Great Barrier Reef have undergone two successive bleaching events, in 2016 and earlier this year, raising experts’ concerns about the capacity for reefs to survive under global-warming