Hundreds of care homes up and down the country are having to close their doors to new residents because of Covid outbreaks and Omicron-fuelled staffing shortages.

Some 70 per cent of homes run by the MHA — one of the UK’s largest not-for-profit care homes — are currently not accepting new residents, or 62 out of 84 homes.

And at Four Seasons Health Care — one of the country’s largest providers — 40 per cent of homes are not taking patients, or 54 out of 135 homes.

Sources in the sector told MailOnline a third of homes nationally are currently unable to take on new residents due to stringent Covid guidelines.

Under current rules, homes cannot take on new patients for 28 days after they have detected an outbreak of the virus — when two or more cases are detected.

A top NHS boss warned having so many homes in crisis mode was leaving already-struggling hospitals unable to discharge patients and free up space.

Care bodies are calling on ministers to reduce the quarantine period, saying it is ‘out of step’ with the rest of the country. For comparison, in England self-isolation can end after seven days with two negative lateral flow tests.

At the same time, the care sector is also grappling with a staffing crisis because so many workers are off isolating with Covid amid unprecedented infection levels.

More than 90 care home operators in England have already declared ‘red alerts’ over shortages, which could compromise quality of care.

With 183,000 Brits being sent into isolation every day on average, there are growing calls from experts, businesses and even NHS leaders to cut self-isolation to five days to avoid paralysing the economy and disrupting vital services.

Around 1.3million Britons are currently thought to be languishing under house arrest as the NHS, rail services and bin collections all buckle under the weight of staff absences.

Care homes were already wrestling with staffing problems heading into the fourth wave after the Government made it compulsory to have two Covid jabs – resulting in around 30,000 staff being sacked in England. 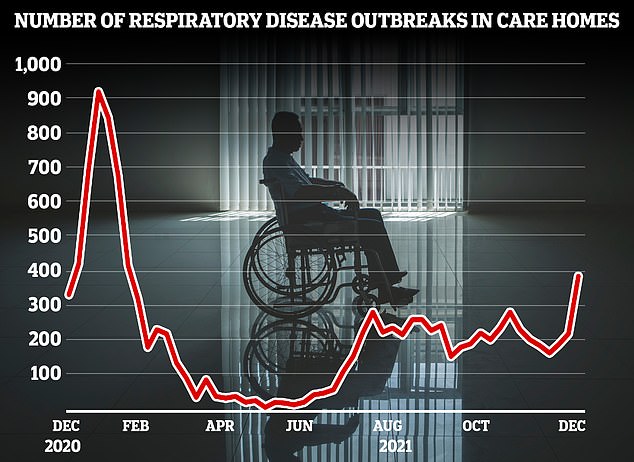 The above graph shows the number of respiratory disease outbreaks recorded in care homes across England. An outbreak is declared when two or more cases are linked to a particular home. In the most recent week data is available 250 of 252 outbreaks where a respiratory disease was reported were due to Covid 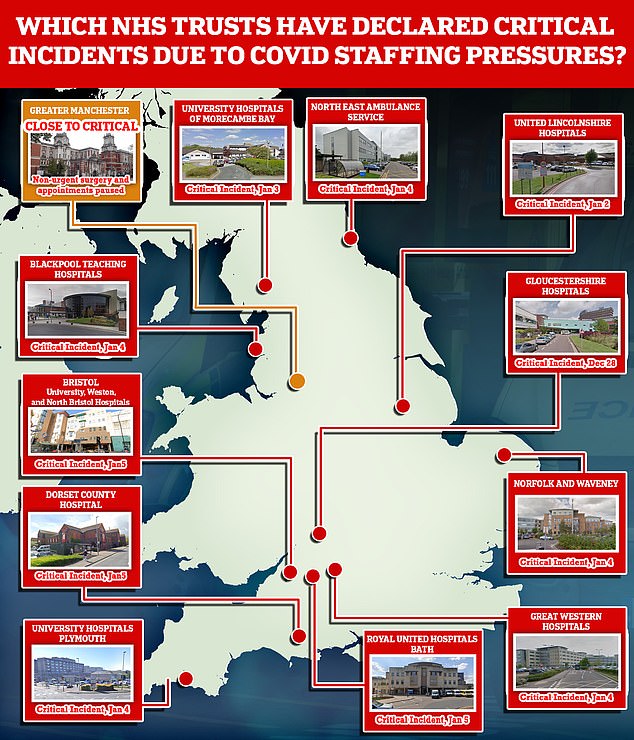 Mike Padgham, chair of the Independent Care Group which represents homes in Yorkshire, warned the number of homes unable to accept new patients was increasing by the day.

He told MailOnline: ‘If homes are under pressure, then that is going to leave people unable to be discharged from hospital to them.’

An NHS leader today revealed he would support slashing Covid self-isolation to five days amid an escalating staffing crisis that has engulfed hospitals and led some to cancel routine operations.

Matthew Taylor, head of the NHS Confederation — an organisation which represents trusts, said two more days should be shaved off the period as long as it was backed up by the science.

He told BBC Radio 4’s Today programme the situation was ‘desperate’ and any way of getting staff back to work was a ‘good thing’. But he said it would be ‘completely counterproductive’ to have infectious staff return to wards because it would exacerbate the spread of Omicron.

Last month ministers cut the self-isolation period to seven days, providing someone tested negative using a lateral flow on days six and seven. But pressure is mounting on Boris Johnson to follow the US, which has squeezed quarantine to only five days for anyone without symptoms.

Around 1.3million Britons are currently thought to be languishing under house arrest as the NHS, rail services and bin collections all buckle under the weight of staff absences.

One in ten NHS employees are estimated to be off sick or self-isolating, and Mr Johnson yesterday revealed plans are being drawn up to call in the Army if the crisis continues to worsen.

Some 20 out of 137 hospital trusts in England have declared ‘critical incidents’ in recent days — or 16 per cent, signalling that they may struggle to deliver vital care to patients in the coming weeks because so many medics are off isolating. Seventeen hospitals in Greater Manchester have also started shelving operations.

At the same time, the number of Covid-infected patients being hospitalised is rising.

He told the Guardian that hospital bosses were reporting that delayed discharges were already adding to pressures, and making it harder to find beds for serious cases coming in from A&E.

He said: ‘This isn’t good for patients as we know patient outcomes deteriorate if patients are medically fit to discharge but can’t leave hospital.’

Care home bosses are pushing to have their quarantine period reduced from 28 days to ensure residents can still see friends and family.

For comparison, in most of the UK people who test positive for the virus can now leave isolation after seven days providing they tested negative on days six and seven.

The MHA’s chief executive Sam Monaghan said: ‘The current rules around outbreaks mean that care homes find themselves closed to new admissions, leaving older people staying in hospital longer than necessary or not getting the care that they need.’

He added: ‘Once an outbreak is declared (often involving only two cases of Covid), everyone living in these homes can have essential care visits but no wider friends and family may visit for up to four weeks.

‘Meanwhile, in the general population, if we test negative six and seven days after a positive Covid test, we may return to socialising straight away.

‘This is a huge disparity and we need the Government to look again at the scientific evidence and review whether these differing approaches are really required.

‘We are in a situation again where, for prolonged periods at a time, older people living in care homes across the country are unable to have visits with their family and friends.

‘This is particularly tough for people living with dementia and their loved ones, whose connections are an important part of their care.’

A spokeswoman for Care England also called for the quarantine period to be reduced, saying it was ‘out of step’ with the rest of society.

They called on ministers to allow homes to make their own judgements on when they should come out of quarantine.

The UK Health Security Agency declares an outbreak when two or more cases of a particular disease are linked to one setting.

Latest figures show there were 386 care home outbreaks of respiratory infections over the week to December 19.

This was more than double the 163 detected at the beginning of the month.

Of the 252 outbreaks where a respiratory disease was reported, 250 attributed the situation to Covid.

It comes amid a deteriorating situation in the NHS, with hospitals now having to cancel operations amid surging outbreaks and a lack of staff.

But pressure is mounting on the PM to follow the US, which has squeezed quarantine to only five days for anyone without symptoms.

Studies show most people are not infectious beyond five days of their diagnosis, which has given other countries the confidence to press on with the plan.

One in ten NHS employees are estimated to be off sick or self-isolating, and Mr Johnson yesterday revealed plans are being drawn up to call in the Army if the crisis continues to worsen.

Some 20 out of 137 hospital trusts in England have declared ‘critical incidents’ in recent days — or 16 per cent – signalling that they may struggle to deliver vital care to patients in the coming weeks. Seventeen hospitals in Greater Manchester have also started shelving operations.

Business leaders today warned that they too were struggling, with the managing director of supermarket chain Iceland saying their absence graph was ‘almost vertical’ and more than double the previous peak.

Train services and bin collections are also grinding to a halt as the virus spreads, while schools are warning that they may not have enough teachers in work to run their normal timetables.