Omicron’s mildness has changed the symptoms of Covid, analysis by Government scientists has suggested.

Britons who catch the virus are now 80 per cent more likely to suffer a sore throat than they were three months ago when Delta was the dominant strain.

But loss of taste and smell is now much less likely to affect Covid-positive people, striking just a third of those it was previously.

Other hallmarks of the virus such as a runny nose, fever and a cough are still just as likely to be experienced by sufferers of the new variant.

The UK Health Security Agency analysis was based on reports from 174,755 Omicron and 87,930 Delta confirmed cases.

They said they were also seeing fewer people experiencing loss of smell now than when Delta was the main variant. 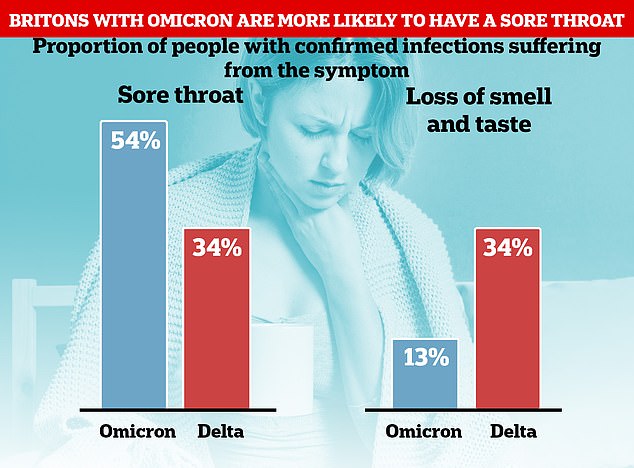 For the analysis, participants were asked to mark down which symptoms they had experienced during a confirmed Covid infection.

UKHSA scientists then compared the answers of those with a confirmed Omicron or Delta infection to investigate whether the warning signs had changed.

Up to 90 per cent of participants experienced at least one symptom during their infection.

Positive swabs were analysed to confirm whether someone had Omicron or Delta.

They found 54 per cent of Omicron-infected people suffered a sore throat, but only 13 per cent said they had loss of taste and smell.

For comparison, for those with Delta 34 per cent suffered either a sore throat or loss of taste and smell.

Professor Tim Spector, who leads the ZOE Covid symptom study, said the main symptoms had not changed from when Delta was dominant.

UK Health Security Agency scientists say they have detected an off-shoot of Omicron in England.

The sub-variant, dubbed BA.2, carries 28 mutations including changes on its spike protein.

A total of 53 cases have been detected in the UK so far.

But it is most common in Denmark across the North Sea, which has recorded about 1,500 cases.

UKHSA sources said there was no suggestion that it was more likely to trigger severe disease or more deadly than Omicron.

When Delta was dominant it also developed several off-shoots including AY.4.2 which was slightly more infectious.

These are still a runny nose, headache, fatigue, sneezing and sore throat, he told MailOnline.

But the top epidemiologist added: ‘We have seen a drop in the prevalence of loss of smell as a symptom.

‘It ranked in the top 10 symptoms for Delta, but has fallen to 17th for Omicron, with only one in five people experiencing it.’

He added: ‘I am still waiting to see when the Government will change it’s out of date symptom list to better reflect the symptoms that people are experiencing.

‘For me, sore throat should be added immediately.’

The study —  run alongside health tech company ZOE — has more than 850,000 contributors.

They report to the app every day on if they are unwell, what symptoms they are suffering and if they have tested positive for Covid.

The NHS has repeatedly come under fire for failing to update its Covid symptoms list, which still includes only a fever, new continuous cough and sore throat.

For comparison, in many other countries including the US their lists now stretch to more than ten warning signs.

Ministers are yet to say when the list could be updated.

But current rules say people should only get a PCR test if they have one of the main symptoms of Covid or have been asked to by NHS Test and Trace.

This no longer applies, however, for those who have symptoms but tested positive using a lateral flow device.

With the worst of the Omicron wave seemingly over, England is now looking to ease restrictions with vaccine passports set to go before the end of this month.

Self-isolation times will also be slashed to five days on Monday for vaccinated people who test positive for the virus.

Health Secretary Sajid Javid said the changes will make the UK the ‘freest’ country in Europe.

But SAGE is already warning of a summer wave of Covid cases, and hospitalisations of up to 10,000 a day in a worst case scenario.

The modellers admit that they cannot predict the summer surge with ‘any certainty’, but forecast an exit wave due to increased mixing and waning immunity between May and July.

They add: ‘Precise timing and magnitude of this exit wave is highly dependent on both population behaviour and the scale of the current wave and cannot be predicted with any certainty.’