Student saves by staying in a HOTEL rather than university halls

As the cost of student living soars, one savvy student is saving money by staying in a hotel rather than her university’s accommodation.

Tigerlily Taylor says the average rent for an ensuite room at her university’s halls is £620 per month, but by staying in a Travelodge instead she cuts her accommodation bill to £140.

Sharing her money-saving tip on TikTok, the 20-year-old student from Hertfordshire said she books a room four times a month close to the University of Northampton where she studies, typically paying £35 a night.

Her story comes  as a National Union of Students and Unipol survey revealed that the average student accommodation rental cost of £7,374 would eat up nearly three quarters of the maximum maintenance loan. 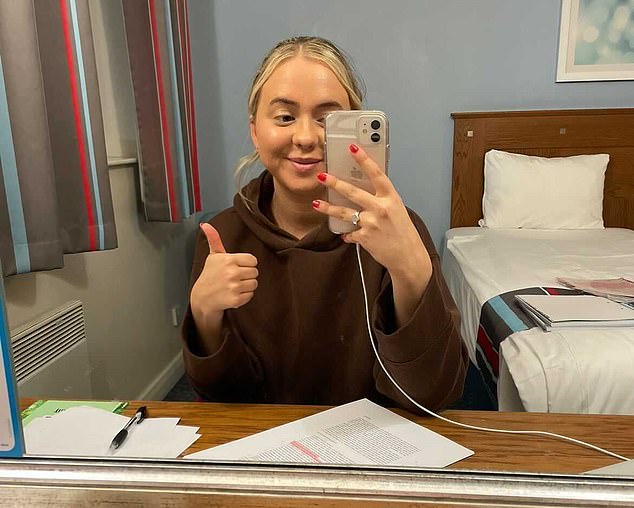 Tigerlily Taylor, 20, spends just £35 per night on her room in the Northampton Travelodge

Speaking to the comparison site MoneySupermarket, she explained that she also commutes two days per week at a cost of £30, bringing her total bill to £260 a month – still £360 cheaper than living in halls.

‘On average, the university accommodation is £620 per month for a large ensuite room,’ she said.

‘My hotel room usually costs around £35 for the night and I only need to stay once a week so every month I spend £140, on average, for a double room at the Travelodge.’

But staying in a hotel could work out cheaper even for students who need to be at university more often.

For a student at the same university, staying in a Travelodge four nights per week and not paying commuting costs, for example, would still come in cheaper than the university halls at £560.

The cost of purpose-built student accommodation offered by universities is soaring, despite many institutions now offering some of their classes online due to the pandemic. 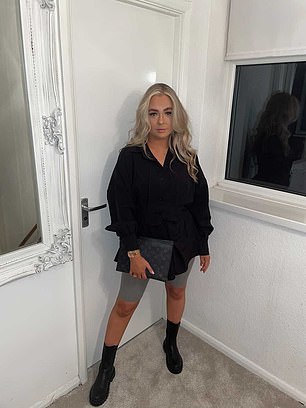 A new survey by the National Union of Students and Unipol states that, for the 2021/22 academic year, the average annual rent for purpose-built student accommodation in the UK is £7,374, or £615 per month based on a one-year contract.

With less time spent in the classroom, more students are deciding that living close to university is an unnecessary expense.

MoneySupermarket looked at different regions of the UK, and worked out how many nights per week a student would be able to stay in a Travelodge hotel before the cost became more expensive than university accommodation.

In London, where students pay a pricey £235.50 per week for accommodation, they could stay for four nights in a Travelodge at £58.28 per night and still save money.

Students in the South East and Scotland could also make big savings, with the cost of three nights in a Travelodge still coming in cheaper than their student digs. 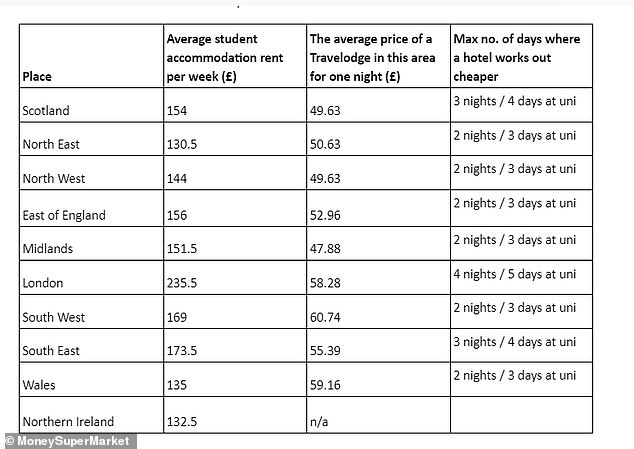 Jo Thornhill at MoneySupermarket said: ‘Looking at the average cost of student accommodation in comparison to average Travelodge prices, there are some savings to be made for those students who aren’t required to be physically present at their university campus every day.’

‘Surprisingly, we found that the most financially rewarding regions for switching to hotel accommodation are for students attending London universities.

‘Students in London with five or fewer days at University would be better off paying for a hotel than student accommodation.’

How does the cost of accommodation compare to the typical student loan?

According to the NUS and Unipol survey, the average student accommodation rent of £7,374 would eat up nearly three quarters of the maximum maintenance loan.

The loans offered to students in other UK countries are different to those in England. 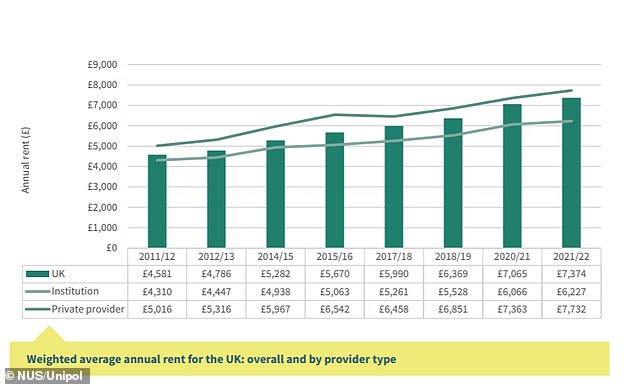 This will be especially difficult for those who do not have financial help from their parents, a part-time job or additional grant funding.

And the amount of maintenance loan students get is based on their parents’ household income, so most will receive less than the maximum figures.

The average maintenance loan awarded for 2020/21 was £6,860, even less than the typical rent for purpose-built student accommodation. However, students can often get cheaper rent with a private landlord (see below).

The maximum maintenance loan for a student in London is £12,382. At the moment, the average annual rent of a room in London takes up nearly 88 per cent of the loan amount (around £10,850), according to the NUS and Unipol.

Once rent is taken out, this means students are left with just £1,525 a year or £38 a week for term-time expenditure. 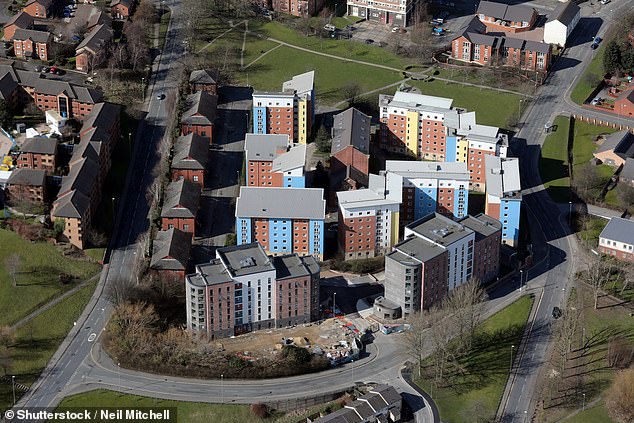 Student halls cost an average of £7,374 per term, according to the NUS and Unipol

And student accomodation can be even more expensive if it is run by a private company, rather than by the university.

The NUS and Unipol survey found that privately-run halls cost an average of £7,732 per year compared to £6,227 among those owned by universities.

‘We need to heed the warnings implicit in these eye-watering figures,’ the report said, adding that ‘rent levels and the actual cost of living generally are becoming ever-more detached from the financial support available to students through the state.’

Lots of students decide to move out of university-managed halls after their first year, and instead take a room in a privately rented flat or house.

However, students in more expensive cities may find their annual rents with a private landlord are not much less than those on university halls.

Students in shared houses will usually be responsible for their own energy and internet bills which will add to the total cost.

In addition, while some university halls will allow students to rent only for the months they are attending university, most private landlords will usually use one-year contracts, meaning they must pay rent over the summer when they may already have moved out.