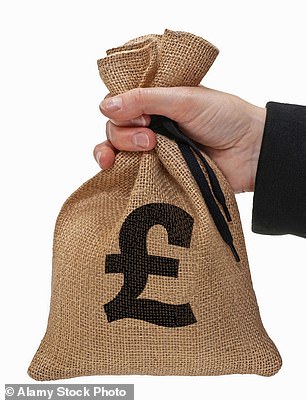 In the bag: Savings institutions are refusing to pass on the rise in interest rates

Savers are being shortchanged by £2.7billion a year because savings institutions are refusing to pass on the rise in interest rates, The Mail on Sunday can reveal.

Analysis of data from the Bank of England confirms the appalling way savers are being treated by banks and building societies – despite rising interest rates in the wider economy.

Our research shows that savers in easy access accounts are on average currently receiving a quarter of the interest they were getting when the Bank of England base rate was last at 0.25 per cent for a sustained period – from August 2016 through to November 2017.

Five years ago interest on average for easy access accounts was 0.37 per cent.

But most recent official figures show it has fallen to just 0.09 per cent.

That means savers are earning £2.7billion a year less on the total £970billion held in these accounts.

Even if savings institutions push up their savings rates to match last month’s 0.15 percentage point rise in base rate – which, outrageously, precious few have yet to do – it will still mean savers are receiving just 0.24 per cent – a third less in interest than they were getting in late 2016 and for most of 2017.

The shabby behaviour of savings institutions highlighted today by this newspaper as part of its Give Savers A Rate Rise campaign has been roundly condemned by consumer champions.

She says they are in danger of ‘putting people off saving altogether’ and imperilling the finances of many pensioners who are seeing their income ‘disappear just when it is most needed’ as energy bills soar.

Since we launched our campaign in the wake of the base rate rise last month, readers have contacted The Mail on Sunday in their hundreds to lambast savings institutions for not playing fair by savers.

Last week, it hiked up mortgage rates, but said it had yet to decide what the base rate increase meant for savers.

Readers accuse well-rewarded building society bosses – including Nationwide’s Joe Garner – of ‘riding on the backs of ordinary people who are trying to save for the future in these difficult times’ and paying ‘peanuts’ to loyal savers. 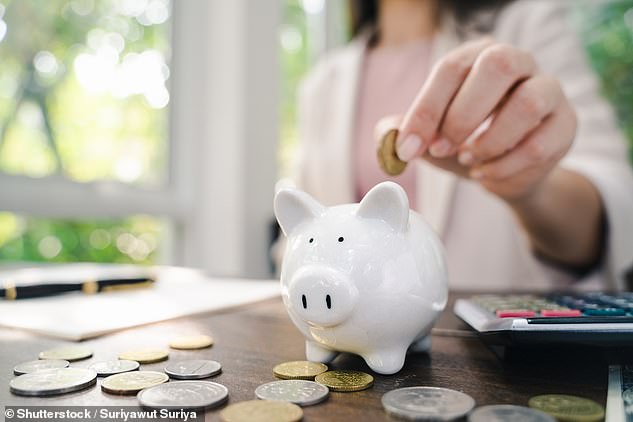 HOW WE CALCULATED THE RATE RIP-OFF

The Mail on Sunday’s analysis, confirming the rotten deal many savers are getting, is based on monthly data that the Bank of England collects on the interest rates that institutions pay savers.

In particular, we have scrutinised the data relating to ‘sight deposits’ – savings accounts where the customer has instant access to their money without penalty.

The latest data, for the end of November last year, shows that the average interest rate on such accounts across banks and building societies was 0.09 per cent, compared to base rate of 0.1 per cent.

Of course, most of the high street banks were (and still are) paying considerably less than 0.09 per cent – in some instances as little as 0.01 per cent.

Even if we assume – rather generously – that rates on these easy access accounts will at some stage (possibly from the start of next month) rise by the equivalent 0.15 percentage point increase in base rate, it means that the average rate should rise to around 0.24 per cent.

Yet it will still mean savers are being treated far more contemptuously than they were when base rate stood at 0.25 per cent for 15 months in late 2016 and most of 2017.

The Bank of England data shows that for this period, the average savings rate stabilised at round about 0.37 per cent. In other words, current savers are likely to end up receiving a third less than back then. 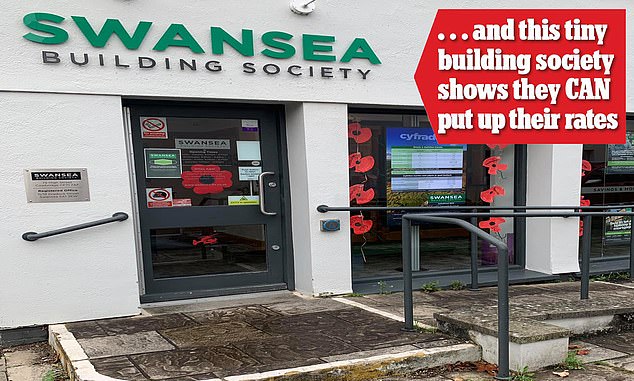 Shining light: Swansea increased rates before the Bank of England base rate went up

On the current average of 0.09 per cent, they would receive £9 and assuming a new average savings rate of 0.24 per cent – once last month’s base rate increase is factored in – £24.

Anna Bowes, co-founder of Savings Champion, says: ‘Unfortunately – some would say outrageously – savings rates tend to fall more when base rate is cut and rise by less when it increases.’

She adds: ‘It continues to beggar belief that it is coming up to four weeks since base rate increased and there has been very little in the way of good news for beleaguered savers.’

How to find the best savings rates 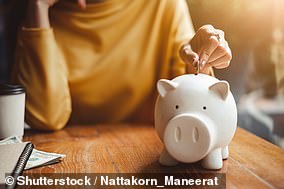 Savings rates have been in the doldrums for many years but the situation was hugely exacerbated by the pandemic and the emergency base rate cut to 0.1 per cent.

But there are ways to ensure your cash is at least in the best of the bunch at all times.

Checking top rates is essential, but it is also possible to make life easier overall and manage your savings pots in one place.

Over the past few years a number of savings platforms have launched, offering savers the option to switch as and when better deals become available and manage accounts from different banks and building societies.

They each work slightly differently and include their own exclusives. To check out what’s on offer take a look yourself:

Or you can view This is Money’s comprehensive best buy savings tables here, independently curated by savings guru Sylvia Morris:

Apart from NS&I, the Government’s retail arm, none of the big savings institutions have yet to push up savings rates in response to December’s increase in base rate. It has been left to the minnows to show the way forward.

Building societies Suffolk (Ipswich as was) and Swansea have already increased rates, effective from the fourth and start of this month respectively.

Both have matched the 0.15 percentage increase in base rate.

Ford Money has also increased rates, albeit by only 0.1 percentage points. It means the respective rates on Easy Access and Easy Access Isa are now a competitive 0.6 and 0.5 per cent.

Building society Scottish has tickled up its Cash Isa rate to an attractive 0.7 per cent.

Suffolk is now paying 0.25 per cent interest on both its instant access account (Everyday Saver) and Cash Isa.

At Swansea, the respective rates for Instant Access and Cash Isa are more generous at 0.5 and 0.55 per cent respectively.

Swansea’s decision to increase savings rates was made before the Bank of England moved on base rate.

In a letter posted over the Christmas period to all of its 23,000 savers, it said: ‘We are increasing all of our savings interest rates by 0.15 percentage points in anticipation of an increase in the Bank of England base interest rate over the next few weeks/ months ahead.’

How much cash savings do you have?

It added: ‘Your society has enjoyed an excellent year and while the society’s board is mindful of the challenges ahead…we believe that the society is now able to increase the interest rates paid on our savers’ accounts.’

The society has a reputation for treating savers fairly. When base rate was cut from 0.75 to 0.25 and then 0.1 per cent in March 2020, Swansea did not cut savings rates until May of the same year in order to provide ‘more stability’ for customers.

On Friday, chief executive Alun Williams told The Mail on Sunday: ‘It was the right thing for us to do. We gambled and we could have been under water for a while if base rate had not gone up. But we wanted to give a little cheer to our savers. It has been a terrible time to be a saver.’

He said the society had met two of the four key demands made by The Mail on Sunday’s Give Savers A Rate Rise campaign – namely to give the 0.15 per cent boost to all savers; and to notify all savers of the changes in writing.

The two not met were to backdate the extra interest to December 16 (the date of the base rate change); and to tell savers of any better deals on offer (although in its defence, it did tell savers of the rates it pays on all accounts, just in case they wanted to move their money to a better paying Swansea account.)

If only there were more savings organisations as customer focused as Swansea.

OUTRAGE OVER INERTIA ON RATES

Readers are livid that the country’s biggest societies have yet to push up interest rates for savers.

Hundreds of savers with money in society instant access accounts and cash Isas responded to last Sunday’s article, which revealed how much the bosses of these organisations are earning while paying paltry interest rates to customers.

Heather Noble, a Nationwide customer for more than 30 years, is appalled at the way savers are being treated by the biggest building society in the country.

She says: ‘Savers are getting such a poor deal from Nationwide and the annual remuneration for the boss Joe Garner [£1,236,000] is outrageous.’

Heather, who lives near Aylesbury in Buckinghamshire, is now retired after working in senior positions at both Rolls-Royce and Eurotunnel.

She is also baffled by the society’s decision to launch a £1million monthly prize draw last year.

She says it is not in the spirit of a mutually owned organisation. ‘How can giving every member’s money to a randomly selected few be fair?’ she asks. ‘I’d rather see the money used to give all savers a better deal.’

Chris Wilkinson, from Ferndown in Dorset, is also angry with Nationwide. He believes longstanding customers like him have been sidelined as the society has pursued new business, strived to make big profits and handed out a fortune to the chief executive in remuneration.

‘As a saver, I want safety over risk,’ says 70-year-old Chris, a former human resources manager in the aerospace industry.

‘So a building society is my natural home. But Nationwide isn’t the organisation it was. It used to offer loyal savers preferential savings rates according to how long they had saved. But it’s removed the tiered rates and replaced them with one single rate. It’s disappointing.’

Barrie Taylor, a retired newsagent from Spennymoor in County Durham, doesn’t mince his words. He says: ‘These building society bosses are riding on the backs of ordinary people trying to save for the future in these difficult times.’

Barry Stafford, from Cheshire, says savers have been given a raw deal for years. He says: ‘There’s a lot of money sitting inside building society accounts earning peanuts. Paying interest of 0.01 per cent is nothing short of disgraceful.’

Retired police officer John Chadwick, who lives just outside Portsmouth with wife Shirley, says: ‘Savers should rebel by withdrawing their money. That would wake up the societies into doing something positive for savers.’

He has moved most of his cash savings into low-risk stocks and shares Isas with the balance in NS&I premium bonds.

The last word goes to Adrian Hurst, a retired IT consultant from Wigan. He says: ‘These building society bosses are lining their own pockets at our expense. Savers deserve better.’ Absolutely.

Are building societies and banks playing fair with savers?

Banks and building societies have been busy upping mortgage rates, with Nationwide revealing a raft of rises, but savers are still waiting.

Nationwide isn’t alone, almost all its big building society and banking rivals have also been failing savers for years – and although they blame the low interest rate environment that doesn’t stop them making bumper profits and paying out blockbuster wages to top executives.

So, are they diddling savers or do they have any defence?

On this week’s podcast, Georgie Frost, Lee Boyce and Simon Lambert look at how and why banks and building societies have failed to meaningfully help savers ever since the financial crisis – and whether there is any hope that things will change?

Press play above or listen at Apple Podcasts, Acast, Spotify and Audioboom or visit our This is Money Podcast page