Passengers on the London-bound American Airlines flight that returned to Miami Wednesday night after a woman refused to wear a face mask claim the first-class traveler appeared to be inebriated and was abusive to flight crew who pleaded with the high-paying customer to follow federal protocols.

‘There was a lot of drinking involved and I was nervous,’ Steve Freeman, who was a front-row witness to the incident, told WPLG Thursday.

‘She sat behind us in first class — she was a first-class passenger and was extremely abusive to the stewards.’

The flight attendant offered the unidentified passenger different types of masks, but  to no avail.

‘She tried loads of different masks, complained about each mask,’ Freeman said

The standoff forced Flight 38, which had been in the air for about an hour, to turn back due to a ‘disruptive customer refusing to comply with the federal mask requirement,’ the FAA said. 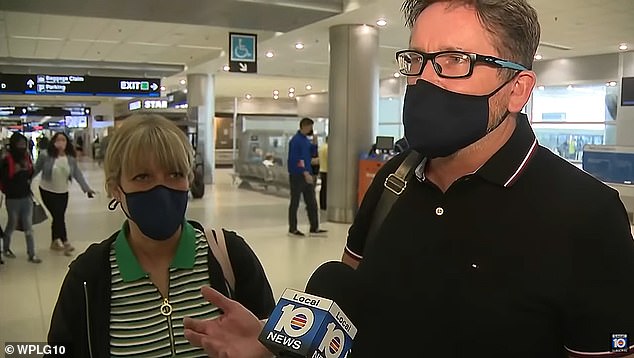 Steve (right) and Teresa Freeman (left) were shocked police did not arrest the first-class American Airlines passenger whose apparently drunken actions caused a London-bound flight to return to Miami. The unruly passenger, a woman in her 40s, is accused of refusing to wear a face covering and being ‘extremely abusive’ towards the flight crew

Freeman, who was traveling with his wife to their home in London, insisted the decision to turn the flight around was not just about the mask, but more about the way she treated the cabin crew.

He said the stewards made several attempts at getting the woman to follow protocols.

‘We almost felt something was going to happen. I could see the writing on the wall — they gave her a lot of warnings, so we were kind of ready for it,’ he recalled.

‘It wasn’t just about the mask. It was the abusive behavior.’

He was stunned the woman was not taken into custody, saying: ‘I can’t see what more would constitute grounds for arrest.’

Miami-Dade police boarded the plane after it returned to the airport and took her away, but the unruly passenger was not arrested – unlike hundreds of other passengers who have been handcuffed since federal laws on face coverings were implemented.

A police spokesperson said American Airlines staff dealt ‘administratively’ with the first-class passenger, which involved her being placed on the airline’s no-fly list pending further investigation. First-class fares on American range from $5,000 to $9,000.

Her actions caused logistical headaches for the Freemans and the other 127 passengers aboard the flight, many of whom were stranded in Miami after the transatlantic flight was canceled.

Many passengers had to stay overnight to catch a re-booked flight on Thursday.

‘I saw a mother with a small child. There was an elderly lady. There was a young girl traveling on her own,’ said Teresa Freeman, Steven’s wife.

‘There was just so many people distressed last night.’ 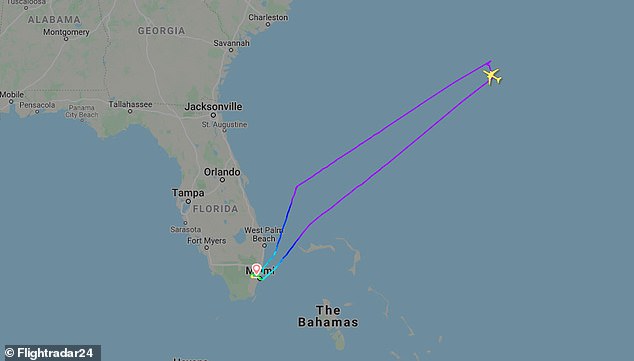 The London-bound American Airlines flight turned back about 500 miles into its 4,400-mile journey from Miami 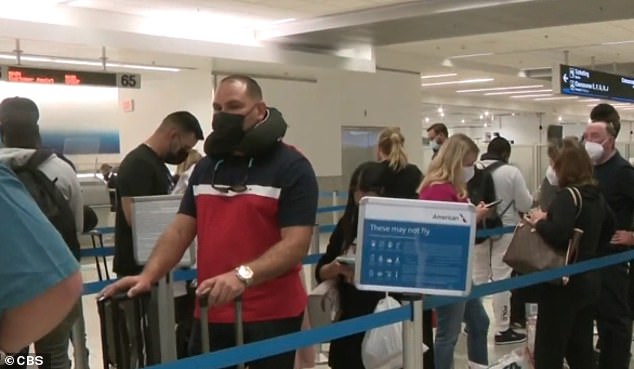 American Airlines said there were 129 passengers and 14 crew members on the plane. Teresa Freeman (not pictured) said many people felt ‘distressed’ by the turnaround: ‘I saw a mother with a small child. There was an elderly lady. There was a young girl traveling on her own’

Despite the high stress and chaos, passenger Theresa Green lauded American for  taking care of her and her fellow travelers.

A spokesperson for American Airlines told DailyMail.com that all customers were booked onto other flights.

However, many were left angry by the lack of information they were given on why the flight returned to Miami.

‘On the tracker, I was watching the flight and I saw the flight turn and I said to [Steve] “I think the flight’s going back,”‘ Teresa Freeman recalled on Thursday.

‘It was about maybe 15 minutes later the announcement came.’ 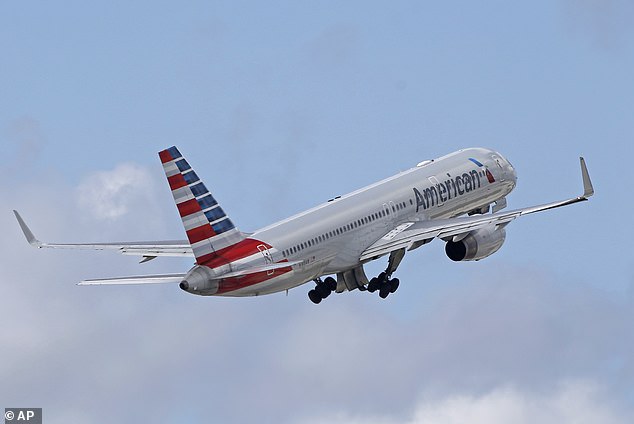 A police spokesperson said the woman was not arrested, as she did not break local law, and that American Airlines staff dealt ‘administratively’ with the passenger, which involved her being placed on the airline’s no-fly list pending further investigation 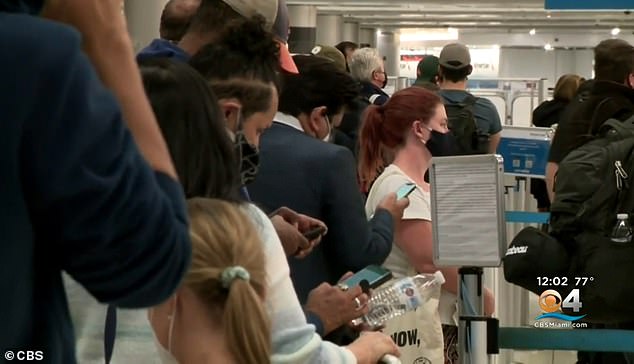 Many passengers had to stay overnight in Miami to catch a re-booked flight on Thursday. A spokesperson for American Airlines told DailyMail.com customers were re-accommodated onto other flight

Another passenger told CBS4: ‘We weren’t given any instructions, just told that we had to go back and now we can’t get our luggage.’

‘They wouldn’t really say anything and I don’t think they told the flight attendants anything because all they would say is there was an extreme incident and they had to turn around,’ said another passenger.

Airlines reported nearly 6,000 incidents involving unruly passengers last year and 151 in the first two weeks of this year, according to the Federal Aviation Administration. Most of them involved passengers who refused to wear masks.

The Transportation Security Administration (TSA) announced the federal mask mandate — which requires travelers to wear masks inside airports and on airplanes to reduce the spread of the coronavirus — in January 2021.

In September, President Joe Biden increased the federal penalty for people refusing to mask up on planes to $500.

Airlines are lobbying the Government to scrap remaining Covid travel restrictions as they battle to repair finances.

Bosses say fully vaccinated passengers should no longer have to take a lateral flow test on day two after arriving in the UK when the travel rules are reviewed later this month.

They also want passenger locator forms to be ditched. 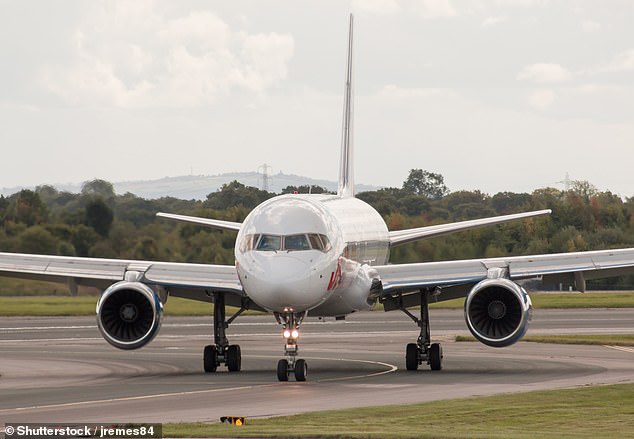 Lobby: Airline bosses say fully vaccinated passengers should no longer have to take a lateral flow test on day two after arriving in the UK

Steve Heapy, chief executive of Jet2, said: ‘I see no reason why foreign travel should not be the same as it was two years ago.

‘Travelling should be a pleasure again, not a drudgery and an exercise in mammoth form filling-out and testing.’

Virgin Atlantic said the goal of this month’s review should be ‘the removal of all testing for travel and developing a playbook for how to deal with any new variants.’

Julia Lo Bue-Said of The Advantage Travel Partnership, said: ‘This news gives firms optimism they have a business worth fighting for.’