By Neil Craven And Ben Harrington, Financial Mail On Sunday

Supermarket giant Asda is considering a takeover of high street stalwart Boots after its US owner Walgreens put the pharmacy chain up for sale.

Asda is owned by Blackburn-based brothers Mohsin and Zuber Issa who have stunned the City with an acquisition spree, buying up more than 6,000 petrol station forecourts around the globe as well as the supermarket giant 15 months ago.

The Nottingham-based chemist chain would provide Asda, which mainly operates large supermarkets and hypermarkets, with an extensive network of more than 2,000 pharmacies in cities and towns across Britain. 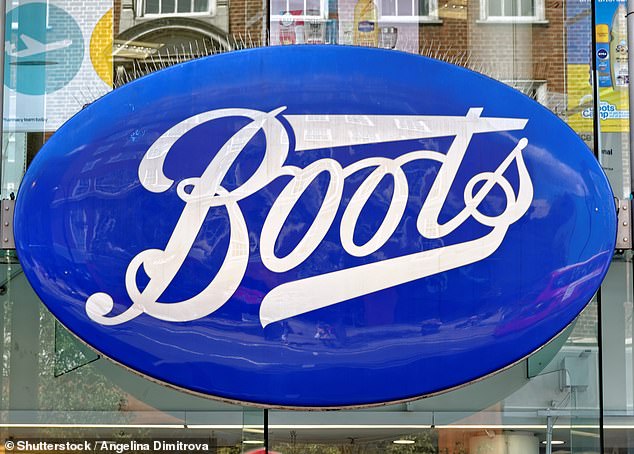 Sign of the times: The possible sale of Boots has already attracted a flurry of interest from private equity firms

The possibility of buying Boots – which employs 50,000 staff and is said to be worth as much as £10 billion – is understood to have been discussed at a senior level.

The discussions are believed to be at an early stage and it is not yet clear whether Asda bosses have made a decision to proceed.

The possible sale of Boots has already attracted a flurry of interest from private equity firms. There has been talk of a joint bid from two of the world’s largest such companies – Bain Capital and CVC Capital Partners.

A formal auction of Boots – founded by the Quaker John Boot in 1849 – is likely to begin in the coming weeks when information on the chain has been distributed among parties that have expressed an interest.

It is possible that Walgreens may yet decide against going ahead with a sale or could choose to spin the chain off as a separately listed company on the stock market.

Grocery industry sources said other supermarket groups have shown an interest. The Boots chain would offer a wider store network that could be used to provide drop-off points for online businesses in local high streets.

One senior supermarket source said: ‘It’s in play and everybody will be looking at it.’

Another industry veteran said the proposals would almost certainly be passed to the Competition and Markets Authority if a supermarket giant attempted to complete a deal.

A merger between Sainsbury’s and Asda was blocked three years ago, which could leave retail chains cautious about trying to force through another high-profile takeover.

‘Like Boots, supermarkets have big health and beauty ranges so the CMA would take a look,’ said one senior supermarket source.

Boots was snapped up in 2007 by Italian dealmaker Stefano Pessina and private equity giant KKR in a blockbuster deal at the height of that decade’s buyout frenzy. The billionaire now sits on Walgreens’ board and has a 16 per cent stake in the US drugstore group.

Goldman Sachs has been lined up by Walgreens to sell the Boots chain, which it bought in two stages between 2012 and 2014.

Estimated valuations circulating around the City vary significantly and range from £5billion to £10billion.

Boots, among the largest retailers in the country, is run by Sebastian James, who has presided over a period of renewed investment in the business. Walgreens revealed strong trading figures at Boots earlier this month.

However, critics say that many of its network of stores are long overdue a makeover which is likely to prove to be a headache for any buyer.

The Issa brothers have already triggered an overhaul of Asda by inviting retailers including bakery chain Greggs and sports shop Decathlon to open outlets inside their supermarkets. The brothers’ own takeaway chain Leon, which they bought last year, also operates inside some Asda stores.

The brothers are planning to open more convenience stores at sites operated by their petrol forecourt business EG Group. They have also promised to invest £1billion to improve the Asda business over a three-year period.

Morrisons was snapped up by US private equity giant Clayton, Dubilier & Rice in the autumn. The acquisition of Asda and Morrisons has triggered speculation that other megadeals in the retail sector could follow.

Other large private equity firms expected to consider a buyout of Boots include Apollo Global Management and Majestic Wine’s majority owner Fortress Investment Group. Apollo and Fortress both missed out on the buyout of Morrisons supermarkets last year.

Apollo also attempted to buy Asda in 2020, while Fortress went on to purchase pub group Punch last month in a deal worth as much as £1billion.

US and UK buyout barons join forces in battle for Boots: Bain teams up with CVC in £7bn takeover race

Two of the world’s biggest private equity firms have joined forces to launch a multi-billion- pound bid for Boots.

American buyout barons at Bain Capital and their counterparts at British giant CVC Capital Partners have emerged as frontrunners in the £7billion takeover battle, after teaming up to make a bid.

Boots, which has 2,200 stores and employs 51,000 people, has been attracting attention since its owner Walgreens Alliance Boots hired Goldman Sachs last month to mastermind a sale. 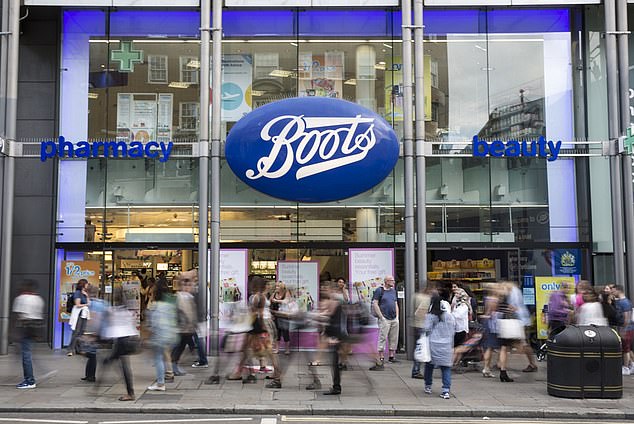 It was founded in Nottingham by Quaker John Boot in 1849 as a shop selling herbal remedies. It is one of the largest pharmacy chains in Britain and one of the country’s biggest private employers.

It was then taken over in 2007 by private equity group KKR, and merged in 2014 with American giant Walgreens to create US-listed Walgreens Boots Alliance.

Boots has struggled through the pandemic, losing £258million in the year to August 31 and cutting thousands of jobs.

Its sale would be the latest private equity takeover of a British business, many of which are considered to be going cheap.

The pandemic ushered in the plundering of more than 1,200 British firms, snapped up by buyout barons for a total of £92billion, and a sale to private equity will raise fears over store closures and job losses.

Bain is reeling from its failed £530million takeover of British mutual insurer LV. It agreed a deal to demutualise the 178-year-old firm, but after a Daily Mail campaign that was rejected by LV’s 1.2m members. 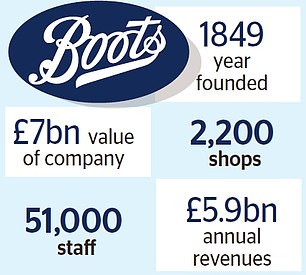 CVC was part of a consortium that bought Debenhams in 2003. The consortium picked up £1.2billion in dividends before returning it to the stock market less than three years later.

When it bought Debenhams, the retailer had £100million of debt but by the time it was relisted that was £1billion. Debenhams then collapsed in December 2020.

They would carve the UK business out of Walgreens Boots Alliance, where it accounts for about 10 per cent of sales.

They believe it could be run more effectively. One of its attractions is its healthcare services, which played a key part in the rollout of Covid tests and vaccines. Boots has administered more than 3.7m tests.

Talks are at an early stage and it is not certain Bain and CVC will succeed.

Other private equity firms are thought to be interested, including Clayton, Dubilier & Rice, the New York firm that took over Morrisons in October.

It has been suggested that Boots could be spun off and listed in London as a stand- alone business.

Supermarkets Sainsbury’s and Tesco are considered to be potential buyers as they share many customers with Boots. Bain and CVC declined to comment.

A Boots spokesman said: ‘We can confirm that Walgreens Boots Alliance, in line with its recently announced priorities and strategic direction that include a greater focus on US healthcare, has announced a strategic review, primarily focused on our successful Boots business, including No7 Beauty Company.

‘This strategic review is at an exploratory stage and further announcements will be made in due course, after the right decision has been reached for Boots’ future and for all stakeholders.’