The southern coast of Cyprus has long been a rival to the Costa del Sol. And, come the winter, it has the advantage with average temperatures around 17c and resorts staying open.

No wonder Limassol, the city which sits on this shore, has become so popular with Russians and other foreigners who have decamped here en masse over the past three decades. Hotels have upped their game accordingly.

I’m billeted at the Parklane Resort and Spa, 15 minutes from the city and sitting on its own blue-flagged beach in Akrotiri Bay. It’s so vast that side on, it looks like a cruise ship (though, if you’re wondering where actual cruise ships have waited out the pandemic, a few are moored off the bay). 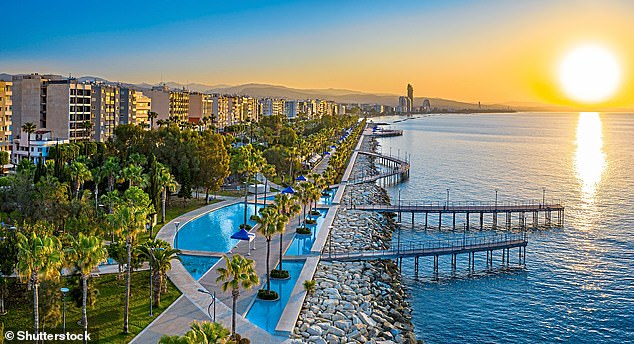 Golden hour: The sun setting over Limassol, which sits on the southern coast of Cyprus

The hotel has all that demanding customers can expect; tropical gardens leading to three pools (one for families, a seawater pool and adults only), four restaurants as well as a sushi bar and poolside cafe, and the chance for the truly competitive to win at sunbathing.

Every morning, I see umbrellas and pristine towels unfurled on empty sun-loungers, and so I ask a fellow sea-basker how early he had to rise to secure his prime real estate. He’s Russian, with perfect English, and says he books it on the way back from his 7.30am run. ‘It’s the Russian way!’ he says.

The staff are excellent; it’s hard to convey warmth in a mask, but they manage it and one finds me a beachfront lounger, leaving a colleague to guard it while he goes to fetch me. Nice touch. 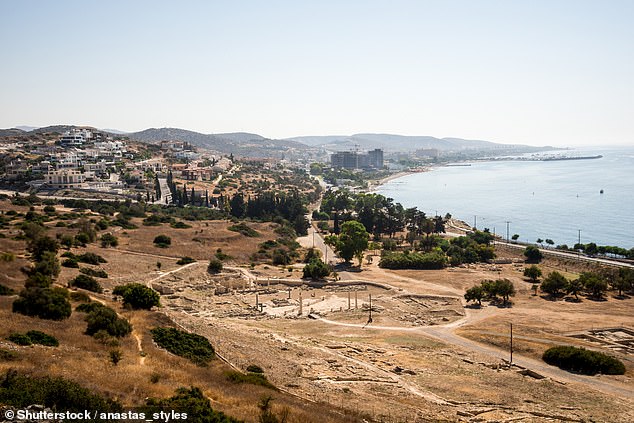 Looking out over Akrotiri Bay from Limassol’s Acropolis Hill. This part of Cyprus ‘has long been a rival to the Costa del Sol’, according to Kate

The hotel has tried to think of everything; even a request for a glass of water will be met with ‘chilled or room temperature?’

It’s a short hop to the city itself, best explored with a guide (the hotel can arrange this). Antonia is a born-and-bred local with second-nature knowledge of the streets.

Walking is so companionable, we make an easy connection as we stroll the old quarter, browsing in Agora, an indoor market with small shops, stalls and cafes — the sort of place that would’ve been packed, pre-pandemic — and the medieval castle where Richard the Lionheart married his beloved in 1191.

The narrow alleys — such as Zik Zak street — that lead away from and around the castle are full of bars, shops and cafes. 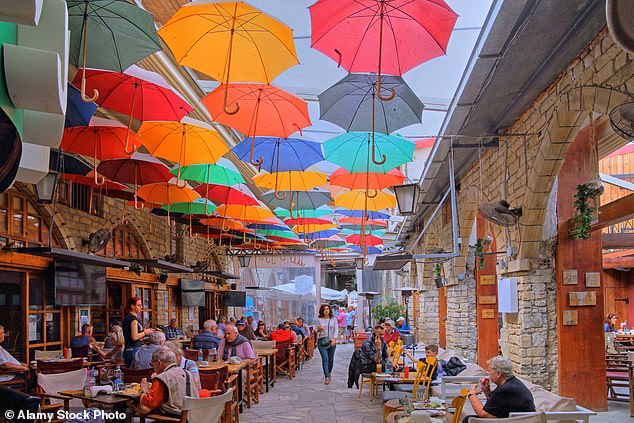 The charming streets of Limassol. Kate says that the city’s bars, shops and cafes are ‘of the irresistible type, often festooned with lights, overgrown plants and memorabilia on the walls’ 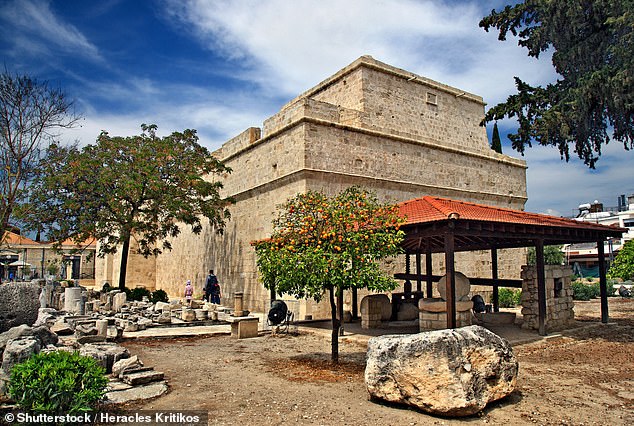 Pictured is Limassol Castle, the medieval castle where Richard the Lionheart married his beloved in 1191

They are of the irresistible type, often festooned with lights, overgrown plants and memorabilia on the walls: local haunts to intriguing-looking people.

But a short drive inland takes you to the real joy: Loulla’s Place in the hills of Choirokoitia. Run by Loulla and her husband, it’s a farm of 300 sheep and goats with amber-eyes that look right into your soul without blinking.

Loulla makes 10 kg of halloumi and 2 kg of anari (similar to ricotta) every day, by hand, in a vat with a plastic paddle. She speaks no English, but radiates the good life: health, happiness, family, nature, simplicity. And the halloumi is delicious, too.

No wonder there are tables laid out in her sitting room, waiting for Loulla’s seven adult children, who arrive every Sunday with their families for lunch.

Returning to my haven, I wonder which of us is in the real luxury.