Snow surrender! Couple blast each other with jets of ice in fun ‘duel’ as the contents of their water pistols freeze in sub-zero temperatures

By Chay Quinn For Mailonline

A couple decided to have some fun in the sub-zero Minnesota weather, using water pistols to fire jets of ice of each other.

Carol and Chuck Bauer, 57 and 59, filmed their playful duel on New Year’s Day in Graceville, Minnesota.

The temperature was -20°C, with a wind chill of -36°C, meaning the hot water vaporised as soon as it was blasted out the pistol, becoming a jet of ice. 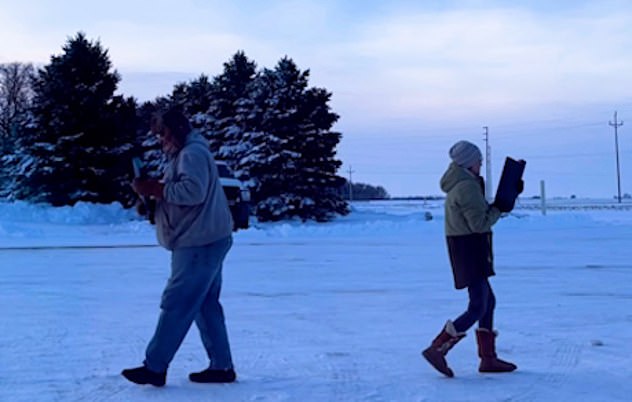 Carol and Chuck Bauer the traditional ten paces before they engaged in the ‘duel’ in Graceville, Minnesota

The pair started the duel with the traditional ten-pace back-to-back walk before turning to fire.

Grandmother-of-five Carol said: ‘I like photography and Chuck likes guns so I decided to put the two together and have a little fun.

‘He also likes Western movies so I decided a gun duel.’

The water froze because boiling water is already close to evaporation, and when its surface area is increased by spraying it as droplets, the large temperature gradient from the cold air is believed to speed up the process.

These droplets immediately turn to gas and then quickly condense and solidify into a cloud of ‘snow’ that falls to the ground. 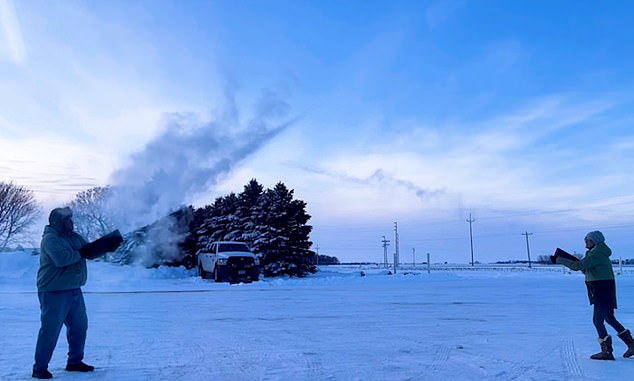 Instead of streams of water, the pistols produced spectacular jets of ice in the snow 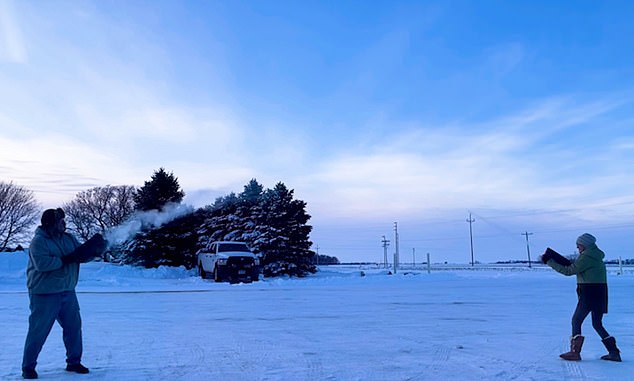 ‘It worked and it was really too cold, and I didn’t want to do it again so I’m glad the first one worked!

‘It is really cold at these temperatures especially with the wind.’

The sub-zero temperatures in Minnesota are expected to continue into the end of this week before the mercury reaches 0C next Wednesday.

And Washington DC and Virginia are both set to be hit by another snow storm, just days after Frida brought eight inches of snow and travel chaos to the area.

The latest extreme weather will see temperatures drop from Thursday evening. Snow is expected to fall later, after 8pm and melt by sunrise on Friday.

The duel in Minnesota mimic similar footage coming out of Alberta, Canada on December 27.

In the footage, a boiling pan of water is thrown in the air, instantly transforming into a spectacular arc of snow. 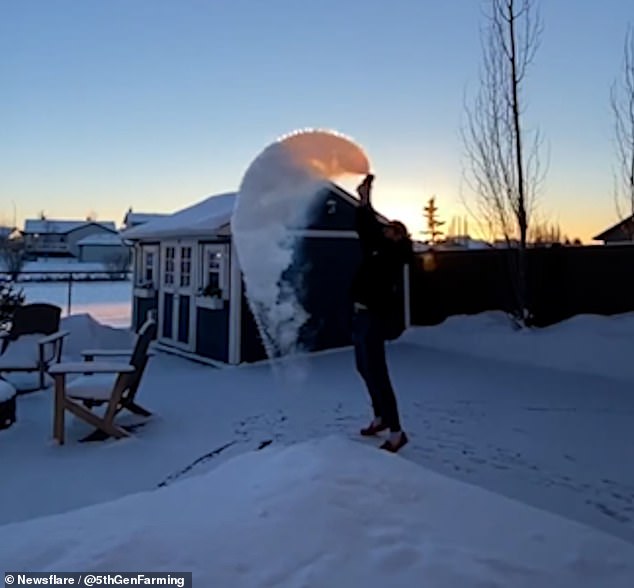 The resident throws the boiling water over his head in a circular motion before watching it turn to ice in Alberta, Canada, on December 27

The scene was an example of a TikTok trend which relies on what is know as the Mpemba effect.

The Mpemba effect is the scientific theory that hot liquids can freeze faster than liquids which begin cold.

It was named after Erasto Mpemba from Tanzania who noted a hot ice cream mixture froze faster than a cold one during a cookery class he was taking during the 1960s.

What is the Mpemba effect?

The Mpemba effect, named after Erasto Mpemba, is the name given to the scientific theory that hot water can freeze faster than the same liquid which begins cold.

In 2016, a team of Singapore scientists said it was to do with the unique properties of the bonds that hold water together.

Hydrogen bonds bring individual water molecules into close contact, which triggers natural repulsion between the water molecules and causes the bonds between oxygen and hydrogen atoms to stretch as well as store energy.

So as the liquid warms, it makes the water molecules sit further apart from each other as the hydrogen bonds stretch.

When the molecules shrink again and give up their energy, this results in it cooling, which the scientists say means that warm water cools faster than cold water and explains the Mpemba effect.