If you ever see a man in dark glasses approach someone playing a public piano and he asks, ‘Mind if I have a go? Um, where’s middle C?’, don’t be fooled.

It could be boogie woogie virtuoso ‘Dr K’ – real name Brendan Kavanagh – who has been entertaining passers-by at train stations, airports and outdoor venues around London for the past few years.

One of his favourite (foot)-stomping grounds is St Pancras station, where he can be found sitting at a piano donated by Elton John.

The father-of-three, 54, from Norfolk, is often in disguise and has performed while dressed as a Covid marshal, workman, aircraft pilot, doctor and even in full hazmat suit.

He told MailOnline: ‘People miss live “raw” music in a world that has become immersed in virtual reality and virtual music.’ 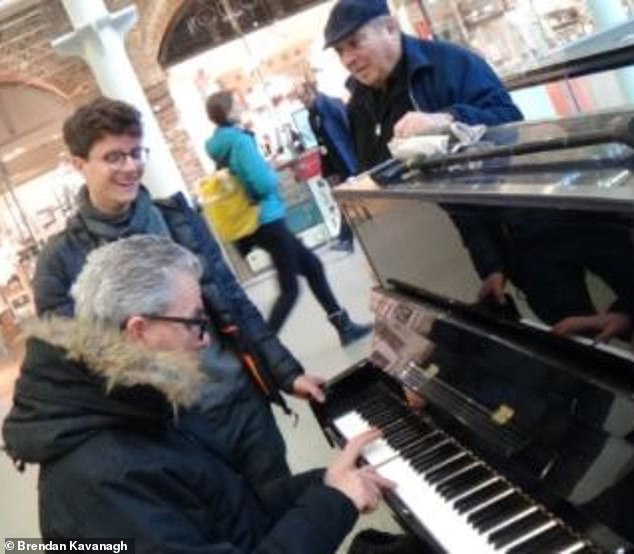 ‘Dr K’ – real name Brendan Kavanagh (seated)  – is a boogie woogie virtuoso who has been entertaining passers-by for several years at train stations, airports and outdoor venues around London. He is seen above at St Pancras station where he dupes a bystander into believing he’s a novice

Although his passion is boogie woogie (a form of blues with a strong, uptempo beat), he is also adept at other styles including classical and rock ‘n’ roll.

‘My musical inspiration was watching Jools Holland playing on Channel 4’s anarchic live pop programme The Tube. That was where I first heard boogie woogie.

‘I later had lessons with the late, great boogie woogie player [William] ‘Hammy’ Howell – he played with 1970s’ doo-wop band Darts – who I was introduced to when I played in pop bands around London when I was a teenager. Hammy died back in 1999 before the internet took off.

‘I was also inspired by Holocaust survivor and concert pianist Professor Nelly Ben-Or who taught me classical piano for about a year in my early twenties.

‘It was also cool that Nelly didn’t mind me playing boogie woogie on her Steinway. That was cool, I thought, for a concert pianist.’

Among his standards are You Are My Sunshine, Swanee River, Fur Elise, Batman Boogie and music from Mary Poppins, along with classical and contemporary improvisations.

Dr K, who is originally from North London, has garnered more than a billion views on social media, mostly on YouTube and Facebook.

In some videos, he pranks unwitting passers-by. If he sees someone playing, he might claim to be a beginner and ask them to slowly teach him the piece.

He will then hesitantly tap the keys before revealing his true talent.

But one particular bystander did not take kindly to his energetic playing – a silver-haired, well-spoken woman who rebuked him for ‘bashing the piano’.

‘The only heckler I have ever had [while performing] live was the “Don’t bash the piano” lady, which turned into a classic comic moment and birthed the Don’t Bash The Piano meme.

‘I find hecklers are more online trolls rather than in real life. I have never had a bad experience live, apart from a little run-in with security at Canary Wharf [when he turned up at the station dressed in police uniform].

‘Boogie woogie tends to cheer people up, not wind people up. Reactions are always great. The worst is that people ignore you because they’re busy or having a bad day,’ he adds. 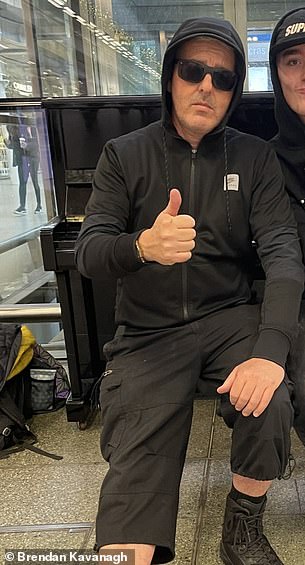 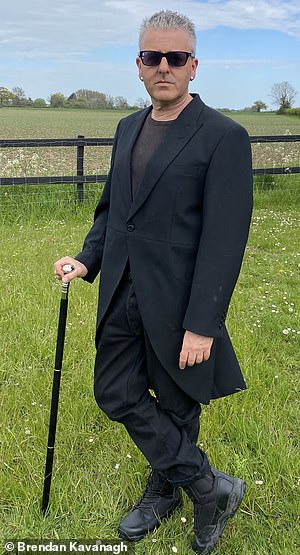 Brendan Kavanagh (pictured) first heard boogie woogie aged around 17 when he saw Jools Holland perform on Channel 4’s The Tube. For several years, ‘Dr K’ worked as an English and Latin teacher before becoming disillusioned with the ‘increasing bureaucracy and pointless testing’

Dr K has pondered going to America, where he has a massive fan base, but the pandemic has made it difficult.

‘I would consider going to the US but the current global situation does not lend itself to me going there,’ he says.

‘Lots of bands and musicians have had to cancel gigs if someone tests positive for Covid, so I am not making plans to tour.’

He also lamented the decline in access to public pianos.

‘A lot of the public pianos in London have disappeared during lockdown, especially the ones in Canary Wharf and Tottenham Court Road Tube, and they have not been put back.’

As for the Dr K moniker, he really is a doctor – of philosophy.

He obtained a PhD in English Literature at University College Cork, where his thesis was on ‘WB Yeats and Eastern Mysticism’.

For several years, he worked as an English and Latin teacher before becoming disillusioned with the ‘increasing bureaucracy and pointless testing’.

But academia’s loss is the world of music’s gain.

Sonos has launched the second iteration of its table lamp speaker as part of its ongoing collaboration with flatpack furniture maestros IKEA. The speaker has been launched under the same Symfonisk brand that saw the first-generation table lamp, bookshelf speaker, and picture frame. All of these speakers are designed to bring the same audio quality and clever wireless audio technology that Sonos is known for, while blending into the décor of your home – rather than standing out as some standalone speakers can do.

The second-generation Symfonisk table lamp speaker arrives with an enhanced sound experience, updated features and customisable designs. But best of all, it fixes some of the shortcomings of the original table lamp speaker, which launched back in 2019.

While the original design had a circular dial that looked like it would act like a dimmer switch or a volume dial, it was just a standard power button. The original speaker also only worked with the less common E12 bulb size, which IKEA has moved to the standard E26 base with the latest generation.

If you want to use a smart bulb with the Symfonisk table lamp speaker to turn on the light with a voice command or choose between millions of colours, the second-generation design from IKEA and Sonos is worth the upgrade alone.

To enable a new level of personalisation – something that’s key to the philosophy behind the Symfonisk brand – the new table lamp is now divided between the base and the lamp shade, which are now sold separately. Customers can choose between a black or white version of the lamp base, as well as a choice of four different lamp shades in either textile or glass, also in black or white, to mix and match for ultimate personalisation and to meet all style needs.

Speaking about the design choices that went into the new table lamp speaker, IKEA’s Alistair Lowther said: “Since launching the first Symfonisk table lamp speaker, we learned a lot about how and where they are being used. For example, a lot of people use the lamp speaker on a nightstand, which led us to create a new, slightly smaller lamp base.

“We’re now also offering customers more design choices to better suit their own individual tastes and styles. By integrating a speaker into a table lamp, we can save space, decrease clutter, and allow people to personalise the atmosphere within their home through both light and sound.”

But the changes in the second-generation Symfonisk table lamp speaker aren’t only cosmetic. According to the team behind the speaker, the new lamp speaker features a completely new acoustic architecture that uses a custom waveguide, creating a great sound experience from any angle.

Just like the original version of the speaker, it streams audio over Wi-Fi – providing better audio quality than Bluetooth, and ensuring that you’ll never hear the BLEEP! of a notification interrupting your favourite song or podcast. The table lamp speaker can be used as the only sound source in a room, or it can be connected with other Sonos products, including those from the Symfonisk range and those created by Sonos.

As with all Symfonisk products, the speaker is also part of the Sonos system, easily connecting listeners to more than 100 streaming services – from Spotify to Apple Music, Amazon Music and Deezer, as well as radio stations from TuneIn, podcasts, and a good old fashioned music library from iTunes.

Highlighting the audio capabilities of the new speaker, Sara Morris, Principal Product Manager at Sonos, added: “As people continue to invest in their spaces, they’re finding creative ways to showcase their personal style, and sound has quickly become an important element for creating the right atmosphere. In addition to its smaller size and variety of design options, the new Symfonisk table lamp speaker provides a wider and more room-filling sound, creating a great listening experience regardless of where you place it in your home.”

The new SYMFONISK table lamp speaker is available in IKEA stores across the UK and on IKEA.com. The lamp base and shades are sold separately, with the base costing £159, fabric shades adding £20 and the all-new glass shades costing an extra £40.