That old adage, ‘When the going gets tough, the tough go shopping’, has never been more apt.

As the latest crop of trading updates for the Christmas period from some of the UK’s biggest companies shows, the pandemic has failed to dampen the British shopper’s appetite for spending.

But what is beginning to show through in the trading results is that shoppers’ habits are changing as to how and where – and on what goods – they are spreading their incomes because of the impact of lockdowns and Covid restrictions. 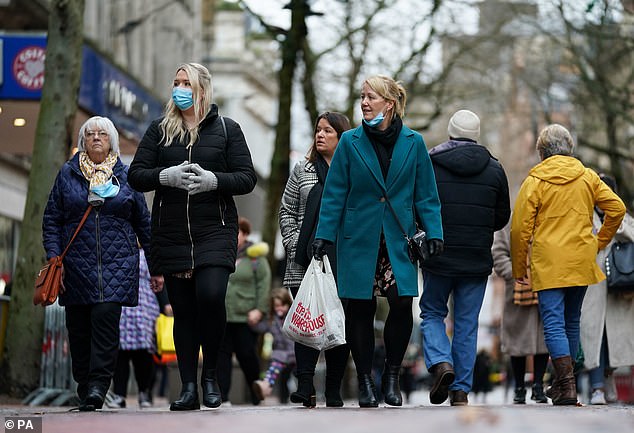 As the latest trading updates for the Christmas period from some of the UK’s biggest firms shows, the pandemic has failed to dampen the British shopper’s appetite for spending

What’s more, the companies which are doing particularly well, like Sainsbury’s, Dunelm and JD Sports, are the ones which have been quick to adapt to these changes.

To be fair, there’s luck involved too as they are already in the sectors where customers are channelling their spending, which is mainly on homes and food.

Take Sainsbury’s. It had an excellent run-up to Christmas with strong grocery sales, and notably fizzy champagne sales, reflecting how customers stocked up to feast more at home.

Profits for the year have been upgraded accordingly. Yet at the same time, Sainsbury’s is keeping prices low, and is clearly not frightened of taking the fight straight to the heart of the German dissenters, Lidl and Aldi.

The grocer knows that keeping prices competitive and giving customers value for money is the best way to drive volume, and will continue to do so this year as the cost of living rises.

Dunelm is another to benefit from the switch. Helped by customers upgrading their homes, the home furnishings group is now upgrading its profits guidance.

Compared to two years ago, Dunelm reports sales up a chunky 26 per cent and is forecasting £140million for the first-half of the year and a ‘material’ increase for the full-year.

Youngsters may not be spending so much going out or dressing up for parties but they are still forking out for expensive, sought-after trainers being sold by JD Sports.

The sports chain is also putting up its profits guidance after a ‘robust’ performance and looks set to easily beat market expectations of around £810million.

It’s not often you hear such confident sentiments coming from company chief executives even in normal times, if there is such a thing.

So it is encouraging to hear that trading so far is looking good, particularly now that the UK looks set to be one of the first countries in the world to emerge from the pandemic.

Yet the last two years will not be pain-free for many companies. Those legacy brands in the middle with city centre departments stores, such as John Lewis, Frasers Group and Marks and Spencer, will be squeezed although the likes of M&S are adapting fast, opening smaller grocery shops with a small number of ranges as an add-on.

One of the longer term shifts in spending patterns, and shopping behaviour, is that some form of ‘working from home’ is here to stay, maybe not for five days a week but certainly a couple.

That’s why online shopping is set to keep rising and why so many retailers – M&S, Greggs and even Pret A Manger – are moving out of city centres to smaller towns or retail parks to be closer to customers, many of whom will become part-time commuters.

Analyst Susannah Streeter of Hargreaves Lansdown warns this will be a painful transition not only for legacy brands but also for the landlords of city centre properties.

Converting office space into residential is expensive and councils are notoriously slow at giving planning consent. Hopefully, they will see sense and act quickly if they want centres to survive and rates to be paid.

It’s a case of needs must.

Those inflationary clouds hovering across the United States don’t look so transitory after all. Inflation has risen for the seventh month in a row to reach a whopping 7 per cent, the highest it has been for 40 years.

Price rises for energy, food, housing and new cars – up by a staggering third year-on- year – are being blamed for the jump.

While the cost of energy subsided in December – its first drop since April – food prices are still up by 6.5 per cent.

Economists say there are signs that prices are easing in some areas, such as raw materials, as supply chains recover from the bottlenecks created by the pandemic.

The Federal Reserve chief Jay Powell needs to find a more appropriate word than ‘transitory’ as well as being ultra-cautious with the timing of interest rate rises if he is to avoid tipping the US into recession.