Tesco promised hard-pressed families an ‘unwavering commitment to value’ as it waded into the supermarket price war.

Boss Ken Murphy said the commitment was important ‘now more than ever’ as a cost of living crisis stretches household budgets. 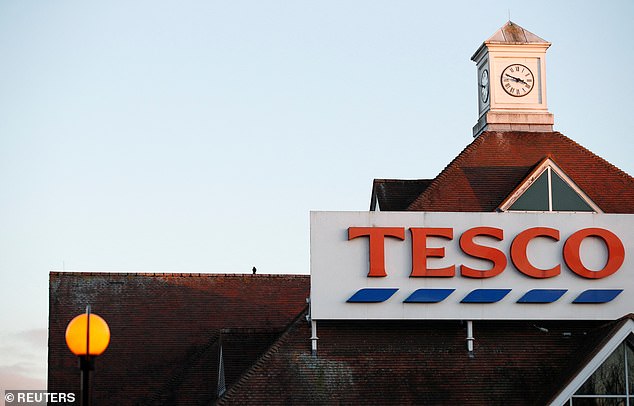 Tesco has promised to keep prices in check by buying stock in larger volumes, negotiating with suppliers and cutting costs elsewhere

The pledge by Tesco – echoing those of Sainsbury’s, Lidl and Aldi in recent days – piles pressure on private equity-owned Morrisons and Asda to keep prices in check rather than chase bumper profits.

Announcing an upbeat set of Christmas trading figures, Murphy said: ‘Looking further ahead we know the environment will continue to be challenging and the impact of Covid is far from clear.

Britain’s private equity-backed supermarkets are under increasing pressure to keep their prices in check this year – denting profits for their new owners in the process.

Asda and Morrisons recently fell into the hands of buyout barons in debt-fuelled deals.

The takeovers sparked fears that prices may rise as the new owners seek to maximise returns. But as a cost of living crisis looms, German discounters Aldi and Lidl have pledged to be the UK’s cheapest grocer, setting the scene for a brutal price war.

Larger rivals Tesco and Sainsbury’s have also vowed to prioritise affordability. Shore Capital analyst Clive Black said it would be ‘a strange strategy’ for the new owners to hike prices. But he added: ‘Private equity are profit maximisers, so it will be interesting to see how that pans out.’

‘We are absolutely committed to continuing to deliver great value for customers.’ Recent Kantar figures showed the average shop is getting more expensive with grocery prices in December 3.5 per cent higher than a year earlier – the biggest increase since spring 2020.

Tesco yesterday said its own costs are rising at around 5 per cent annually, up from its usual level of between 2 per cent and 3 per cent.

But its prices only rose by around 1 per cent annually in the period and it promised to keep them in check by buying stock in larger volumes, negotiating with suppliers and cutting costs elsewhere.

Tesco said sales in the six weeks to Jan 8 were 3.2 per cent higher than the same period last year when business was boosted by December 2020’s lockdown.

Families looking to treat themselves after spending the previous Christmas in lockdown pushed sales of its premium Taste the Difference range up 15 per cent from last year.

The performance prompted it to increase its profit forecast for the year to the end of February to ‘slightly above’ £2.6billion.

That would be a boost from last year’s £2billion and better than its previously forecasted £2.5billion to £2.6billion range.

But the announcement underwhelmed investors who had expected a bigger upgrade, sending shares down 0.9 per cent, or 2.55p, to 289.7p.

AJ Bell investment director Russ Mould said: ‘Despite a strong Christmas and a small upgrade to forecasts, Tesco didn’t do enough to impress the markets.

‘Inflation, as long as it is relatively mild and Tesco can keep tight control on its own costs, isn’t all bad news for the business. The company is looking well placed at the start of 2022.’

Richard Hunter, head of markets at interactive investor, said: ‘Tesco has again cemented its reputation as the UK’s flagship supermarket, boosted by a dominant Christmas performance.’