Tuscany holidays: The little-known coast of this sublime region is Italy at its tantalising best


As soon as we step into the cathedral, a British woman sidles up to me and whispers: ‘This is exactly what we should have.’

She is looking down at the gnarled 14th-century flagstone floor, which has a natural sheen from the millions of feet that have glided across it over the centuries.

‘A little beyond our budget and I’m not sure the local cardinal will go for it,’ I proffer, before moving hastily down the nave towards the stupendous high altar. 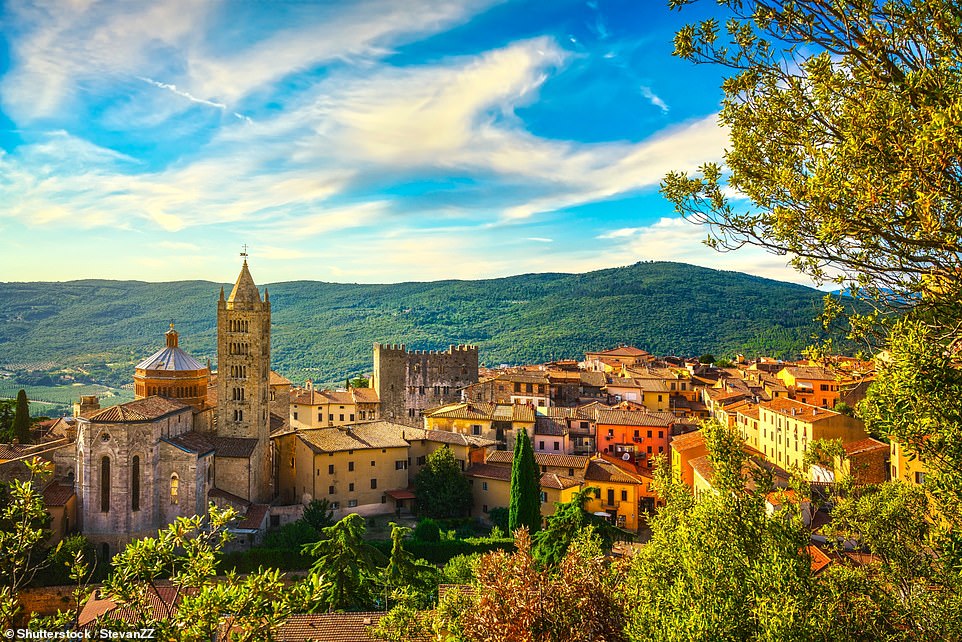 Pictured is Massa Marittima, a fortified Tuscan town high on a hill some 20 miles from the coast 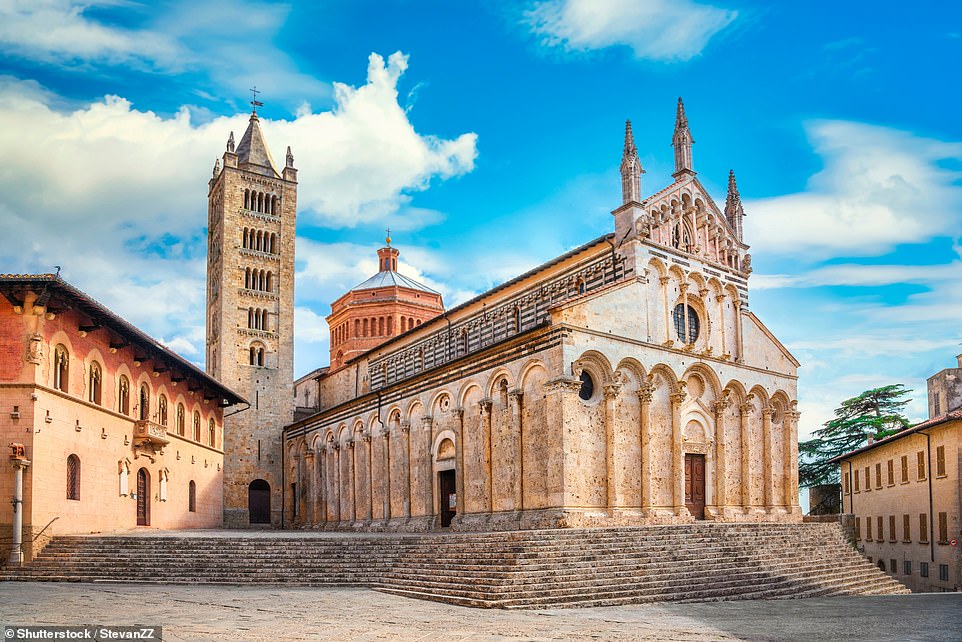 The British woman in question is my wife. We have knocked down our bungalow in Wiltshire and are building a small house — and there has been lots of discussion about whether to have a wood or stone floor.

The cathedral stands in the grand main piazza of Massa Marittima, a fortified Tuscan town high on a hill some 20 miles from the coast.

My sense of awe about this mini Siena (with its sloping square and tall clock tower) is heightened by never having heard of Massa Marittima, let alone its magnificent cathedral dedicated to St Cerbonius, who was born in AD 493. 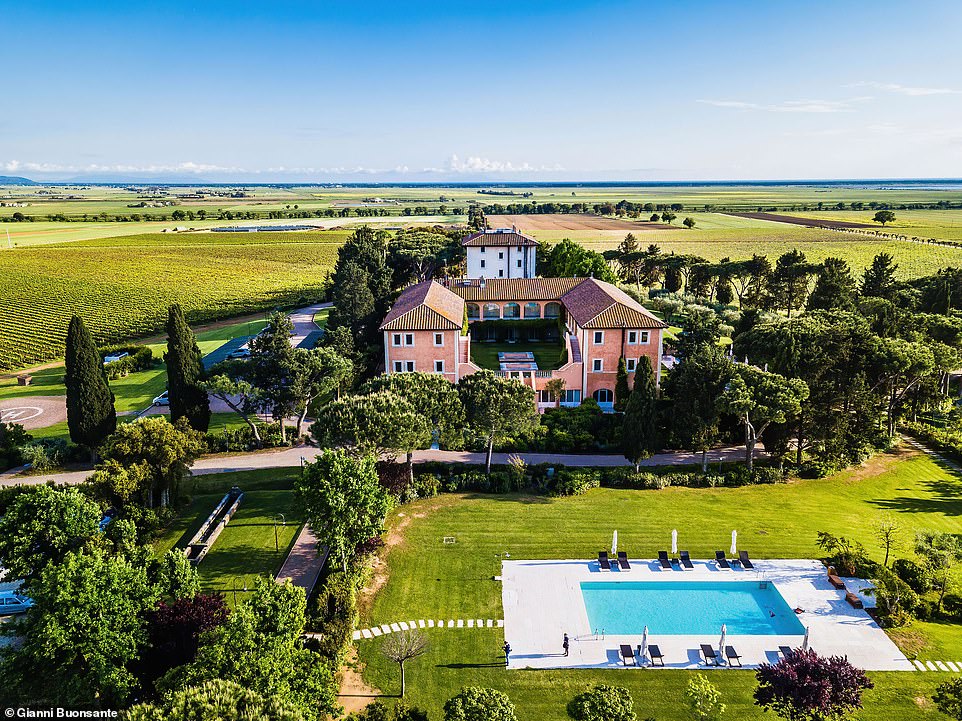 An aerial view of L’Andana hotel, which is set in a house that once belonged to the 19th-century Grand Duke Leopold II 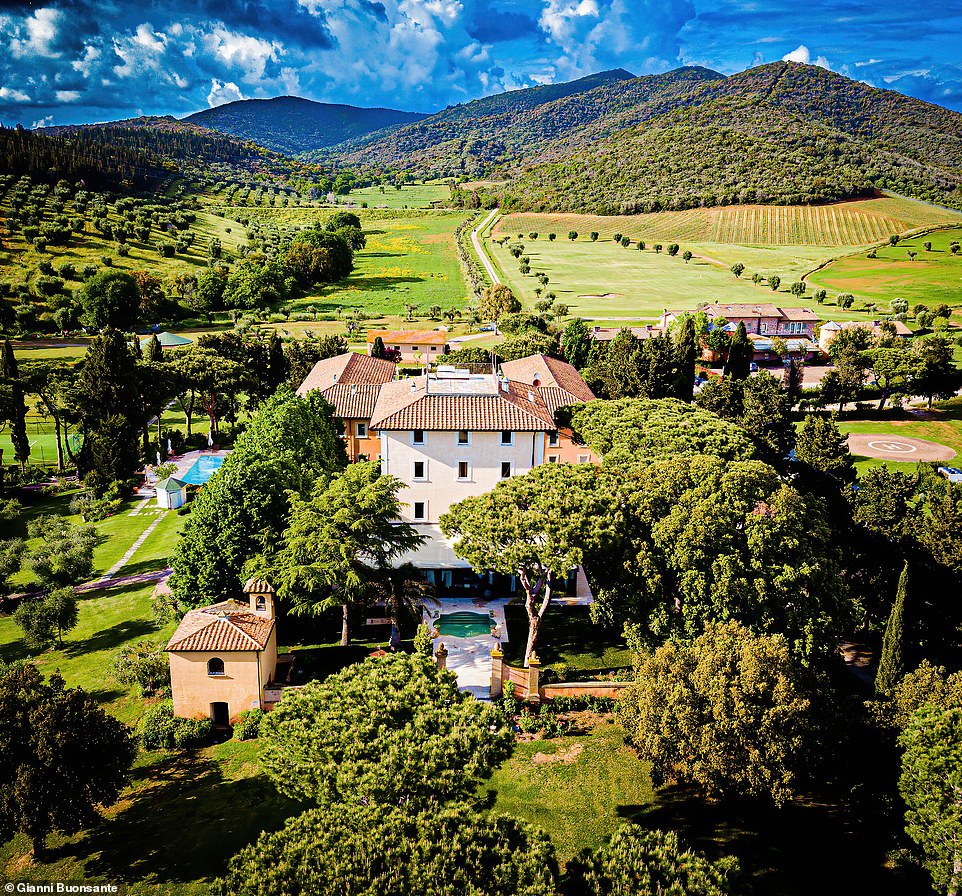 To reach the hotel, Mark travels up a ‘glorious’ driveway that is ‘lined with pine and cypress trees’ 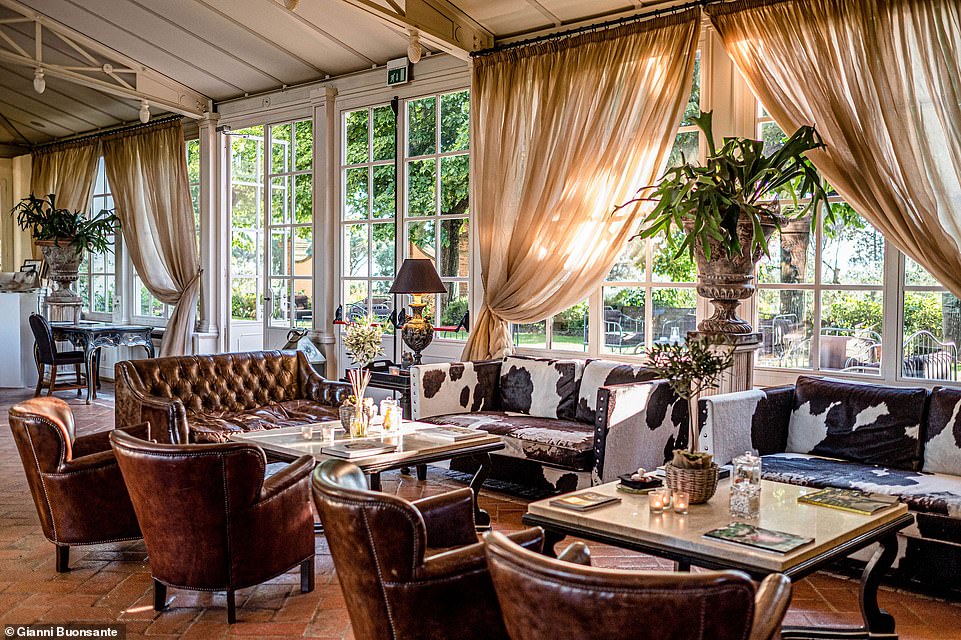 The lobby of the hotel. Describing the hotel, Mark says: ‘Rooms are ornate; colour schemes are bold (our pink headboard makes us blink); floors are rich terracotta’

This part of Tuscany has yet to make it into the brochures of UK estate agents catering to those looking for a bolthole overseas.

In fact, a lot of people are hardly aware that Tuscany has a coastline, with, as it happens, glorious sandy beaches (the region has more Blue Flag beaches than anywhere else in Italy), rugged coves, dunes, marshlands and sleepy hilltop villages.

The Maremma region includes much of south-west Tuscany, with Grosseto its largest city. We fly to Pisa, pick up a car and head south down the coast, arriving at our hotel 90 minutes later. Or, rather, we reach the huge iron gates of L’Andana — from there it’s still almost another mile before you arrive at the hotel itself. 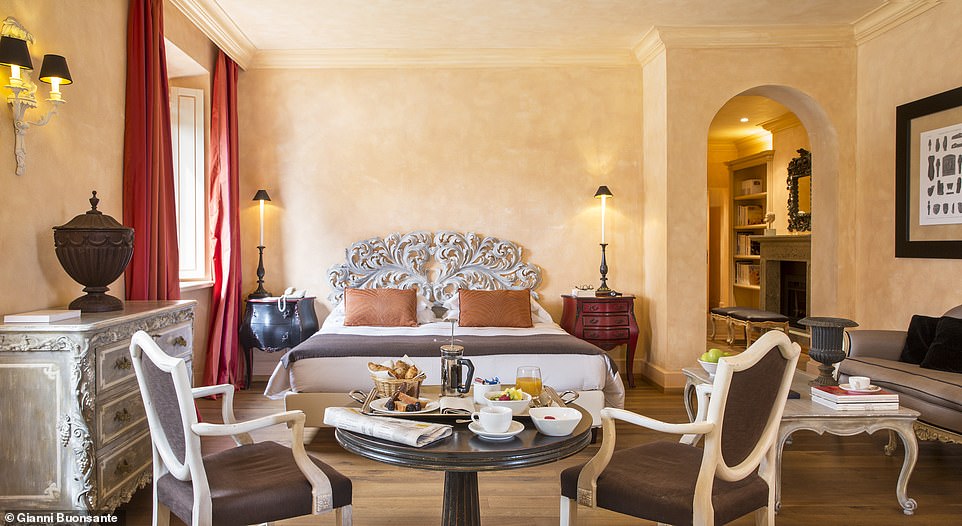 Vintage: A room at L’Andana hotel. Mark says that the establishment is ‘old school Italy’ 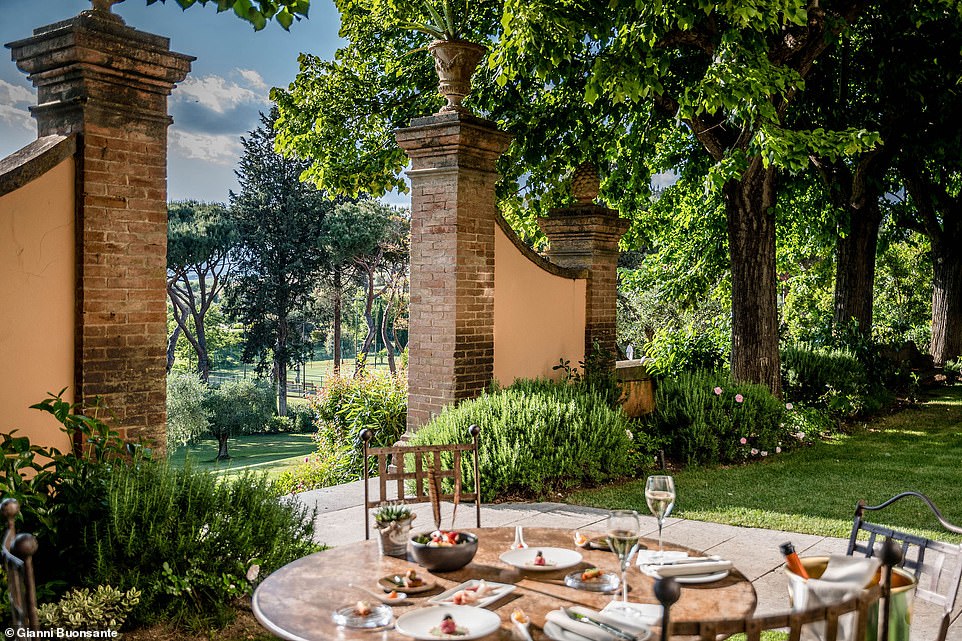 And what a glorious mile it is: a drive lined with pine and cypress trees planted alternately with immaculate precision more than a century ago; vineyards to the right, vineyards to the left covering more than 500 acres, plus some farm buildings where the region’s famous Maremma longhorn cattle graze languidly.

All this and the imposing house at the top of the drive, which once belonged to the 19th-century Grand Duke Leopold II, who used it as a summer hunting lodge and about whom you won’t hear a bad word in these parts because he oversaw a huge land reclamation project that brought wealth and employment to the area.

There is nothing pretentious about the atmosphere, helped in part by the staff, whose charm makes it impossible to complain when they get our breakfast order in a muddle on two of the three mornings we are here.

That’s the beauty of Italy. I spent three months in Naples in my 20s and always remember being told that the traffic lights were suggestions, not requirements. 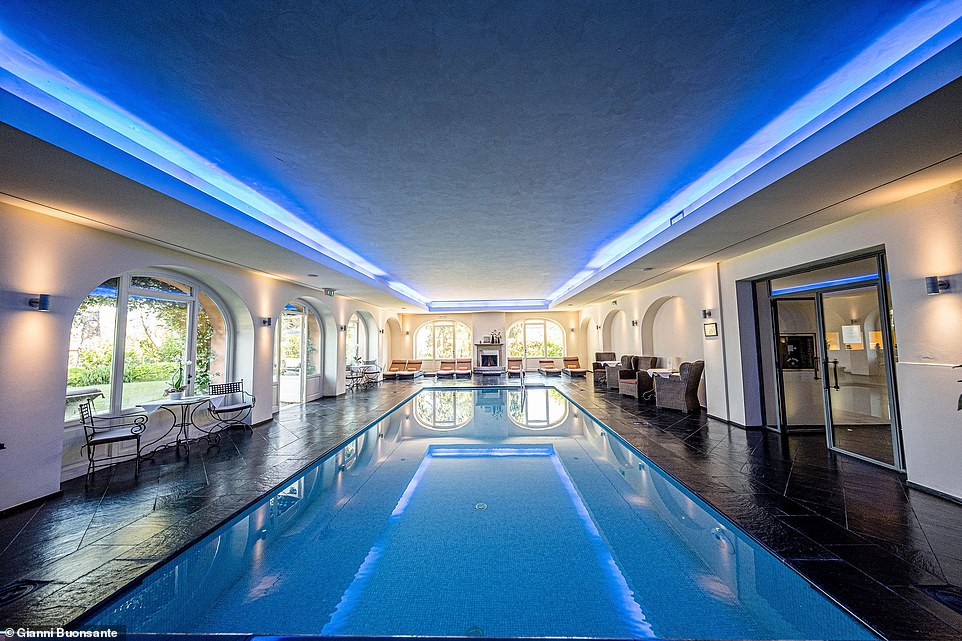 The spa at L’Andana. ‘There is nothing pretentious about the atmosphere, helped in part by the staff,’ Mark says of the hotel 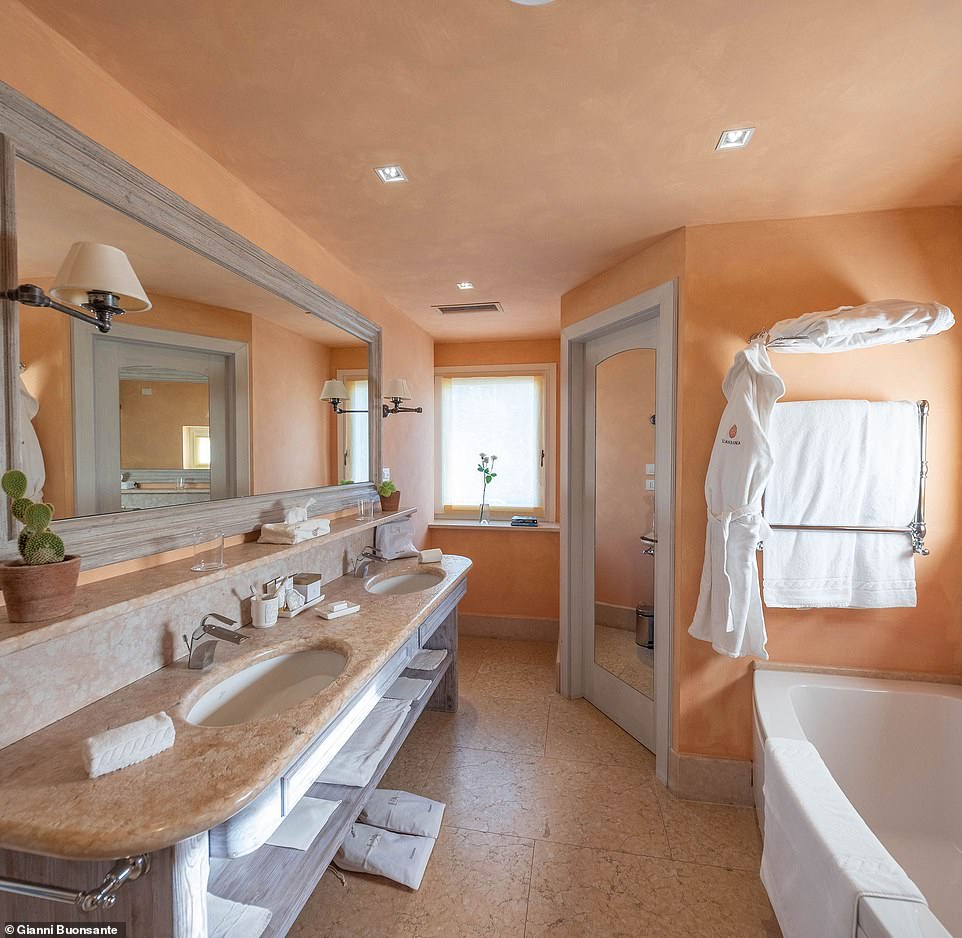 The bathroom of the Terrace Deluxe bedroom. The hotel was formerly used as a summer hunting lodge 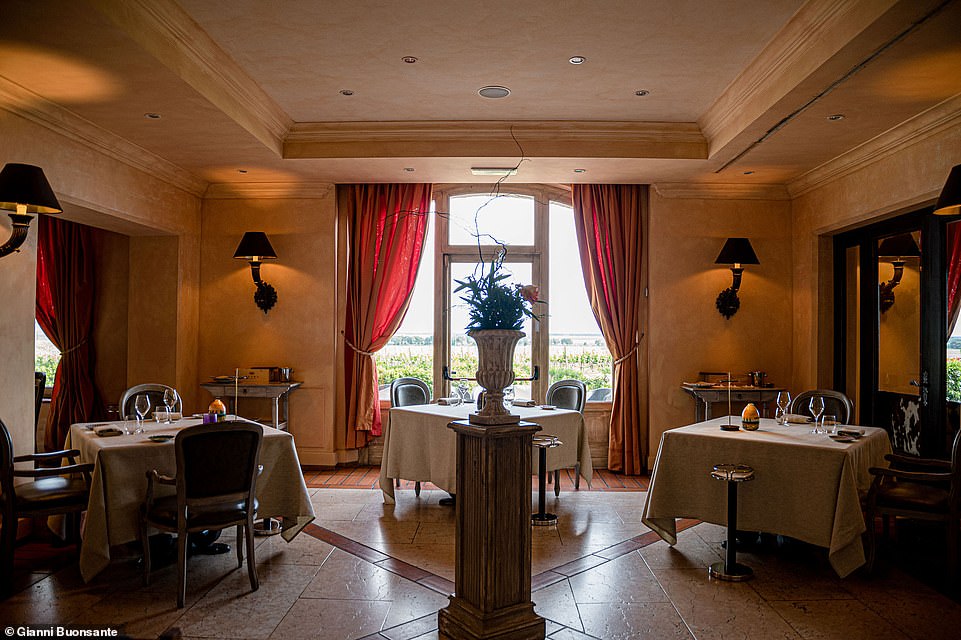 Pictured is the hotel’s Michelin-starred La Trattoria restaurant. Mark says that it’s ‘not the sort of place where a wannabe game-show host takes twice as long to explain a dish as it does for you to eat it’

We eat mainly in the garden, although one evening we walk through an archway of roses and jasmine and over a bridge to the hotel’s La Trattoria restaurant, which has a Michelin star but, thankfully, is not the sort of place where a wannabe game-show host takes twice as long to explain a dish as it does for you to eat it.

There are three pools: one for grown-ups, one for children and one in the Kids’ Club. The children’s one is best by far, with views back to the house on one side, the Uccellina mountains on the other.

L’Andana is 15 minutes from the coast, reached via the bustling little town of Castiglione della Pescaia, with its Aragonese castle lit up at night spectacularly. 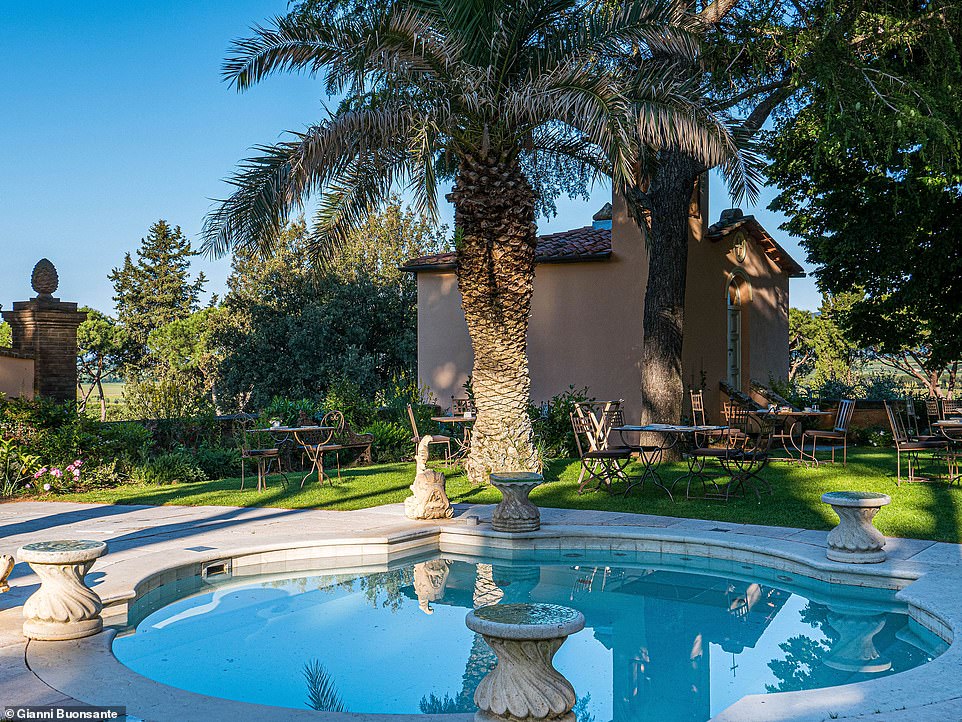 Pictured is one of the three pools at the hotel. Mark reveals that one pool for is for grown-ups, one is for children and one is in the Kids’ Club 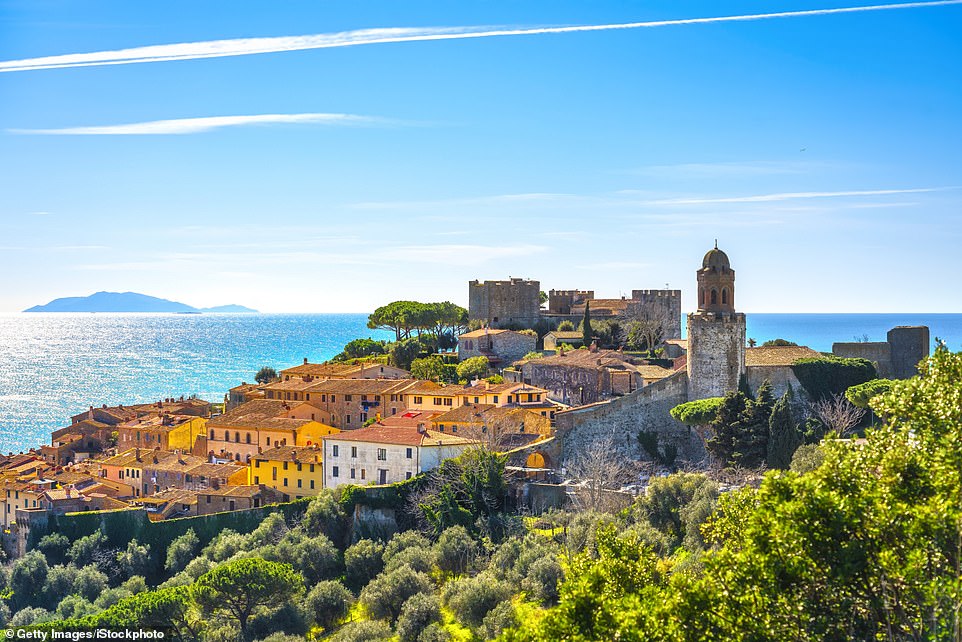 L’Andana can be reached via the bustling little town of Castiglione della Pescaia, pictured above 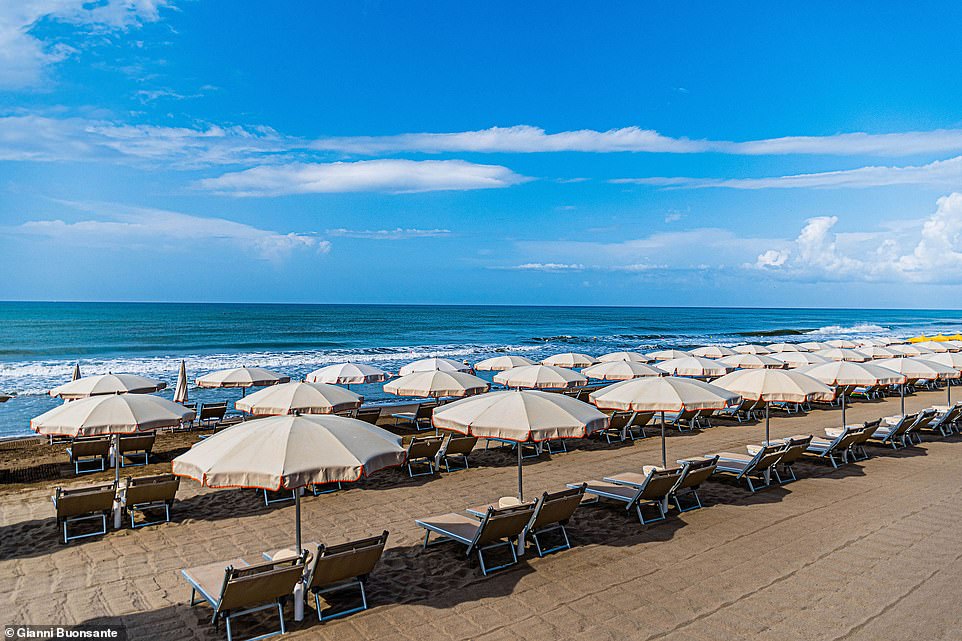 Pictured is Le Cannucce beach club. ‘For £50 you get an umbrella, sun loungers, bar, restaurant and a ringside seat for Italy at play in all its guises,’ writes Mark

We spend our last full day at a beach club called Le Cannucce, with which the hotel has an arrangement. For £50 you get an umbrella, sun loungers, bar, restaurant and a ringside seat for Italy at play in all its guises — middle-aged men in tight Speedos, elderly women with tummies rolling over their bikini bottoms and clusters of young women adjusting their thongs before prancing along the sandy catwalk in search of admirers.

That evening we eat in town. The place is heaving but we find a delightful spot at an osteria just off the main drag. We sit at an outside table and order far too much, demolishing a couple of bottles of the local wine, which wouldn’t taste anything like as wonderful back home on a rainy Monday.

There are ancient flagstones underfoot, giving off a gentle heat after a day of baking in the sun. Come to think of it, they would look good in our new little house too — but perhaps not quite as good as the ones in St Cerbonius’s cathedral.