Baillie Gifford’s flagship investment trust has been one of the best performing investments over the past few years.

However, the trust has underperformed over the past six months and a further tech sell-off has seen its share price fall more than eight per cent since the start of the year. 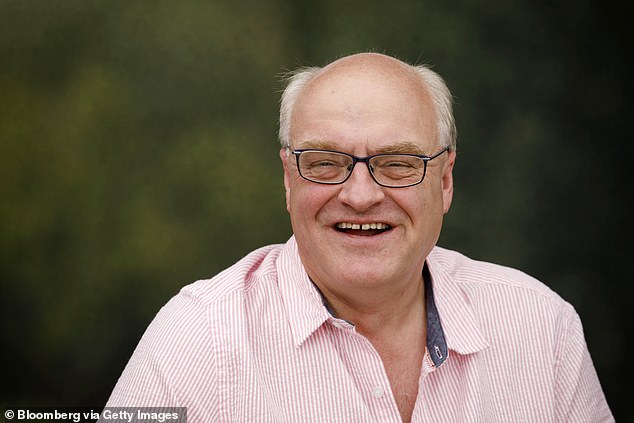 Scottish Mortgage fund manager James Anderson, who is set to leave in April, made early bets on Tesla and Alibaba

Scottish Mortgage has a strong track record when it comes to investing in high-growth companies.

Fund manager James Anderson, who is set to leave in April, made early bets on Tesla and China’s Alibaba, which it still holds.

But it has had a tough time in recent months. Since the start of December, its share price is down 18 per cent while its net asset value (NAV) is down almost 16 per cent.

‘It has been de-rated a little, with a move from a 2 per cent premium to a 1 per cent discount, but the main driver of its recent decline has been the performance of some of its key holdings,’ says Simon Elliott, head of research at Winterflood.

Since the end of November, Moderna, which is the trust’s largest holding, has seen its share price fall 40 per cent.

Technology stocks do well when capital is cheap so it is no surprise there has been a shift away from growth stocks in recent months, which has in turn affected the value of the trust.

Since the start of 2022 there has been a particularly sharp sell-off of tech stocks, including Tesla whose share price has sunk 11 per cent, in the wake of the latest Federal Reserve meeting minutes.

Ark Invest’s Innovation ETF, which is seen by some as a good indicator of the health of US tech, is also down nearly 12 per cent this year.

Fed officials have indicated they are considering quantitative tightening – a reversal of its huge stimulus programme – shortly after raising interest rates.

The central bank had already intended to wind down its quantitative easing programme but it now looks to be moving far quicker in the face of high inflation.

QE – which sees the Fed buy bonds to increase money supply – has helped stock markets and helped to flood the financial system with liquidity.

‘This has particularly turbocharged “growth” stocks in areas like technology, communications services and e-commerce, by keeping borrowing costs incredibly low.

‘That’s because investors typically assess the present value of fast growth companies on what their future earnings over several years are worth paying for today,’ says Jason Hollands, managing director of Bestinvest.

‘Many fast growth companies have also benefitted from borrowing inexpensively to fund their expansion, as well as use this finance to buy-back their own shares and boost their stock prices.’

The high-growth tech stocks favoured by Scottish Mortgage are particularly sensitive to policy tightening and rising interest rates, given their valuations are dependent on potential future earnings.

What should investors do?

Investors may be alarmed by an 18 per cent share price decline over a five week period but it does reflect the trust’s general investment approach.

‘High growth, disruptive companies can often see share price volatility and this will periodically have a short-term impact on Scottish Mortgage’s performance.

For investors to benefit from Scottish Mortgage’s investment approach, they have to be prepared to hold its shares for a long period and grit their teeth during the tougher times.

‘However, the rationale is that over the long-term the exceptional growth experienced by these portfolio companies will lead to high returns,’ says Elliott.

‘It is worth noting, for instance, that despite its recent struggles Moderna’s share price is still up nearly 1,000 per cent since the start of 2020.

‘For investors to benefit from Scottish Mortgage’s investment approach, they have to be prepared to hold its shares for a long period and grit their teeth during the tougher times.’

Investors with exposure to technology may face further turbulence as the Fed moves to taper its stimulus programme and raise interest rates.

Hollands says: ‘For investors heaving exposure to “growth” funds and who are overweight the US and tech, now is the time to consider taking a more measured approach, reallocating some of their investments to dividend generating companies, sectors like financials and commodities and topping up exposure to the UK equity market, where valuations are a lot more reasonable.